THE WAY OF ALL FLESH 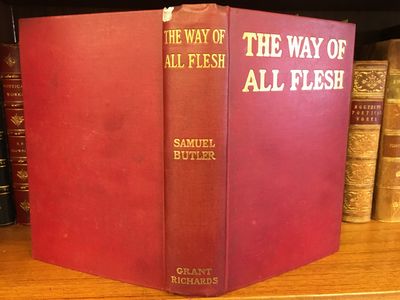 by Butler, Samuel
London: Grant Richards, 1903. First Edition, First Issue. Hardcover. Octavo, [vi], 424, 12 [ad] pages; VG; bound in original red cloth lettered in gilt; housed in a VG green cloth slipcase with chemise, black label with gilt lettering; top edge tof ext block gilt; Very minor rubbing and shelfwear to cloth, small white paint stain to head of spine; front pastedown has the bookplates of collectors A. Edward Newton and Barton Currie; RD consignment; shelved case 2. Alfred Edward Newton (1864-1940) was an American author, publisher, and avid book collector. He is best known for his book Amenities of Book Collecting (1918) which sold over 25,000 copies. At the time of his death, it was estimated that he had approximately 10,000 books in his collection, focusing on English and American literary works, the major part of which were auctioned by Parke-Bernet Galleries, New York in April, May, and October 1941.

UP THE YEARS FROM BLOOMSBURY [SIGNED]

Boston : Little, Brown, and Company , 1927
(click for more details about UP THE YEARS FROM BLOOMSBURY [SIGNED])
View all from this seller>