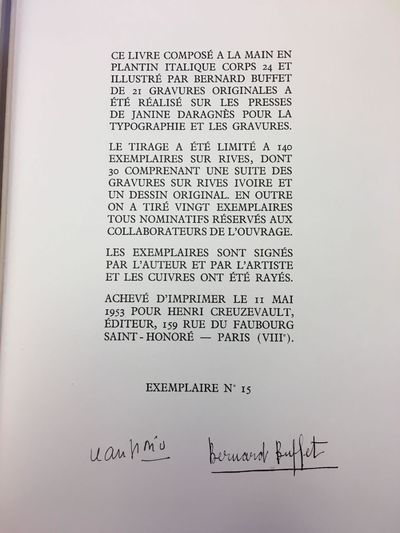 by Buffet, Bernard [artist]; Giono, Jean
Paris: Henry Creuzevault, 1953. Limited Edition, #15/140. Hardcover. Folio (10" x 15"), 52 leaves in 26 signatures in original paper folded cover (covered in a glassine protective wrapper); Fine; Bound in cloth sleeve covered in paper with a box enclosure. Number 15 of 140 copies, on Rives paper. Printed by Janine Daragnès on May 11, 1953. With 21 original etchings by Buffet, including 7 full page and 3 double-page, plus one on cover; plus a separate suite of 23 drawings, including 3 double-page drawings. Limited edition reissue of 1939 work, with illustrations by Bernard Buffet (1928-1999), signed by Giono and Buffet, with a foreword by Pierre Bergé.; shelved case 11. Giono's Search for Purity is a testament to pacifism. Originally published in August 1939 as a preface to Lucien Jacques' Moleskin Notebooks (Gallimard,1939), a diary kept during World War I, and banned and not offered for sale until after the war.;


Jean Giono (1895-1970) was a French author who wrote works of fiction mostly set in the Provence region of France. Colline, his first novel, won him the Prix Brentano and $1,000, and an English translation of the book. Due to his success with Colline, Giono left his day job at a bank to devote himself to writing on a full-time basis.;. 1321607. Shelved Dupont Bookstore. (Inventory #: 1321607)
$2,400.00 add to cart or Buy Direct from
Second Story Books
Share this item

Torrence : Millar Publishing Company , 1967
(click for more details about Wonder Wart-Hog No.1 and 2)

Kavkas a Historical Saga of the Caucasus

by Quandour, M. I.; Kennett, Frances

Moscow : Lada M Publising , 1994
(click for more details about Kavkas a Historical Saga of the Caucasus)
View all from this seller>