CLIO AND EUTERPE OR BRITISH HARMONY AN ADMIRED AND RARE COLLECTION OF THE MOST CELEBRATED OLD ENGLISH AND SCOTCH SONGS, CANTATAS, DUETS & TRIOS. [VOLUMES ONE, TWO, AND THREE] 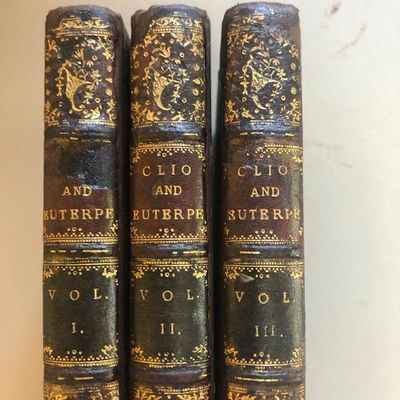 
A total of approximately 600 pieces of music included herein, the vast majority being one page long, each illustrated with an engraved headpiece.


shelved case 12. "The 4th volume, which is extremely rare, ends abruptly at p. 112 and is probably often thrown aside as imperfect." [Catalogue of English Song Books Forming a Portion of the Library of Sir John Stainer]; The 4 volume version presumed published c. 1778, Originally printed in two and then three volumes by H. Roberts, this is a later Welcker edition, being a reissue of the 1758-1762 editions of volumes 1-3 with a fourth volume added.; Originally issued in parts of 8 pages each, with the general title page, index, and frontispiece supplied with the final part of each volume.;


Published by both Henry Roberts and John Welcker over multiple editions and years, beginning in 1739 as "Calliope, or English Harmony"

New York : Random House , 1975
(click for more details about RAGTIME [INSCRIBED])
View all from this seller>