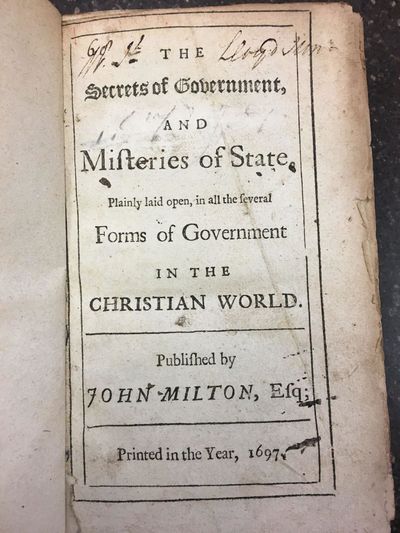 
JG consignment; shelved case 0. First issued as "The Cabinet-Council, Containing the Chief Arts of Empire, and Mysteries of State; Discabinated in Political and Polemical Aphorisms" by John Milton in 1660. The unsold copies were re-issued by the publisher in 1661, omitting Milton's name from the title, together with his preface, presumably in order not to hinder sales following the proclamation of 1660 condemning the author's Pro populo Anglicano defensio.;


This is "The Arts of Empire" 1692 with a new title page. "The Arts of Empire, and Mysteries of State Discabineted. In Politics and Polemica Aphorisms, grounded on Authority and Ex-perience," published by John Milton, London, 1692, and Printed by G. Croom for Joseph Watts. [Sabin page 278, 281]

San Francisco : The Westgate Press , 1929
(click for more details about NEARER THE GRASS ROOTS [SIGNED])
View all from this seller>