NOTES OF A MILITARY RECONNAISSANCE, FROM FORT LEAVENWORTH, IN MISSOURI, TO SAN DIEGO IN CALIFORNIA, INCLUDING PART OF THE ARKANSAS, DEL NORTE, AND GILA RIVERS - THIRTIETH CONGRESS, FIRST SESSION - EX. DOC. NO. 41 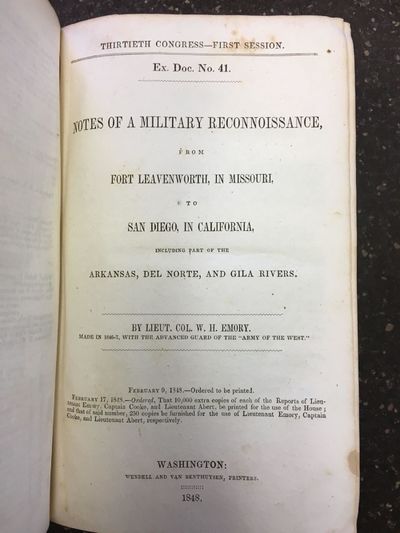 by Emory, William H.
Washington: Wendell and Van Benthuysen, Printers, 1848. First Edition, House of Representatives issue. Hardcover. Octavo, 11, 614 pages; rebacked with contemporary calf boards preserved, new spine with label preserved, burgundy morocco with gilt lettering; moderate rubbing to boards; mild foxig throughout; First edition, House of Representatives issues of the report, containing the reports of Lieutenant Abert, Colonel Cooke, and Captain Johnson as well as that of Emory; the Senate issue only contained the Emory report; with both folding maps; profusely illustrated; shelved case 1. At the start of the Mexican War, Emory was selected to join General Stephen Watts Kearny and the Army of the West (1846) to take New Mexico and California. Along the way he kept a detailed journal of the march down the Rio Grande and across to the Gila River, and down it to its mouth on the Colorado River, then to the Pacific Coast. It became an important guide book for the road to Southern California. This report described terrain and rivers, cities and forts and made observations about Native Americans, Mexicans, primarily in future New Mexico Territory, Arizona Territory and Southern California. It was and is considered one of the important chronicles and descriptions of the historic Southwest, particularly noted for its maps. [wikipedia];

Frederick : Marken & Bielfeld , 1928
(click for more details about History of Carrollton Manor, Frederick County Maryland)
View all from this seller>