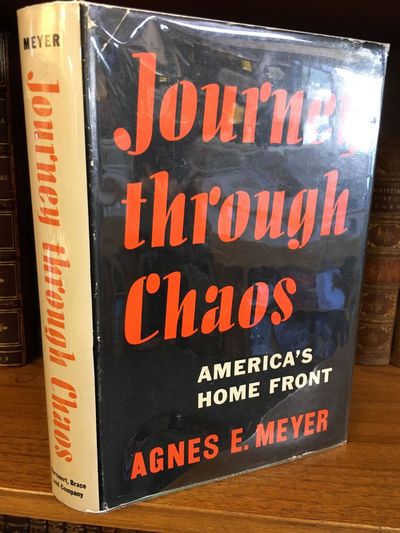 by Meyer, Agnes E.
New York: Harcourt, Brace & Company, 1944. First Edition, First Printing. Hardcover. Octavo, 388 pages; VG/VG; spine off-white with red lettering; dust jacket protected with a mylar covering, price uncut '$3.00', mild chipping and closed tears; extremely scarce; shelved case 1. Agnes Elizabeth Ernst Meyer (née Ernst; 1887-1970) was an American journalist, philanthropist, civil rights activist, and art patron. Throughout her life, Meyer was engaged with intellectuals, artists, and writers from around the world. Meyer's marriage to the financier Eugene Meyer, son of Marc Eugene Meyer, provided her with wealth and status that enabled her to influence national policy, such as social welfare programs. Meyer lobbied for the creation of the Department of Health, Education and Welfare and for the U.S. government to provide federal aid to states for education. President Lyndon Johnson credited Meyer for building public support for the Elementary and Secondary Education Act of 1965, which for the first time directed federal assistance towards school districts that served children from low-income families. She advocated for equal employment and educational opportunities, regardless of race. Meyer's investigative journalism showed the inequities of racial segregation in schools in the Washington metropolitan area. The purchase of The Washington Post in 1933 gave Meyer and her family the capacity to affect American opinion for several generations. Daughter Katharine Graham led the newspaper during the coverage of Watergate Investigation that eventually led to the resignation of President Richard Nixon and earned the paper a Pulitzer Prize. During Senator Joseph McCarthy's anti-Communist campaign in the 1950s, Meyer delivered speeches that characterized the campaign as a threat to academic freedom. [wikipedia];


From the dust jacket: "In 1943-1944 Mrs/ Eugene Meyer visited twenty-six war centers and thee observed the effect of our all-out war effort on the physical and moral life of he home population. This is her report on the migratory industrial army of twenty million people finding themselves in strange cities, working at unfamiliar occupations, and attempting to adjust themselves to a new life. The resulting chaos involves not only the adult workers but he six million children of these workers; it is the children who are paying the dreadful price for this uncontrolled migration, easy money, unaccustomed hours of work, and the absence of parental care. Is this America? is the question which Mrs. Meyer many times asked herself during her travels. Her objective and accurate reports on social conditions in the war centers were published in the Washington Post, where they immateriality attracted national attention. These articles are here revised and reprinted, with an Introduction and an important Conclusion";


The cities discussed extend the width and breadth of the United States, from Portland, Oregon to Portland, Maine, from Uniontown, Pennsylvania to Orange, Texas, with a stop in Wichita, Kansas. The Articles on Washington DC include "Congested Areas Get Attention," "Negro Housing in the Nation's Capital,' and "The Negro and the Army." Puget Sound Area has an article entitles "Seattle Fights Venereal Disease," while Brunswick, Maine has one on "Returned Vets Bitter About Home Conditions.";. 1318254. Shelved Dupont Bookstore. (Inventory #: 1318254)
$400.00 add to cart or Buy Direct from
Second Story Books
Share this item
Second Story Books
Offered by

THE LETTERS OF VIRGINIA WOOLF

THE DIARY OF VIRGINIA WOOLF

New York : Harcourt Brace Jovanovich , 1977-1983
(click for more details about THE DIARY OF VIRGINIA WOOLF)
View all from this seller>