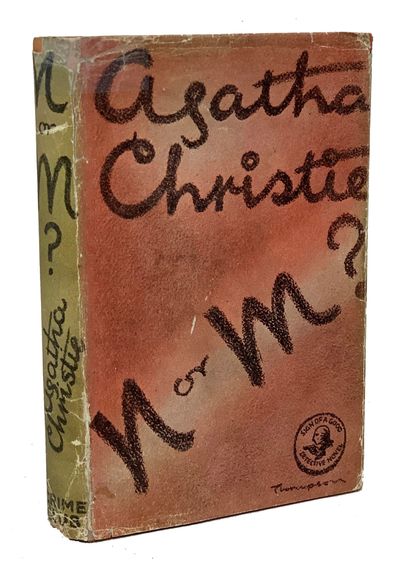 by Christie, Agatha
London: Publisher for the Crime Club By Collins, 1941 First edition, first printing. Publisher's orange cloth, lettered in black; crimson dust jacket lettered in script to front cover and spine. About near fine with some fading to the spine ends, contemporary former owner gift inscription (dated Christmas 1941) to front endpaper; in the original unclipped dust jacket with general wear and creases along edges and spine, a few small tears, spine toned and with tape reinforcements to verso. A very good copy of a scarce Christie title. N or M? features detective duo Tommy and Tuppence, married couple Thomas and Prudence Beresford, who were previously featured in The Secret Adversary (1922) and Partners in Crime (1929). The story is a wartime spy thriller. "N or M?" refers to a message left by a murdered British secret agent, though it also has meaning as a latin phrase: nomen vel nomina, taken from the Book of Common Prayer. Interestingly, Christie named one of the characters in this book Major Bletchley, which prompted an investigation by British Intelligence MI5, who were afraid that Christie had access to a spy in Bletchley Park, a secret code-breaking unit.. First Edition. Hard Cover. Near Fine/Dust Jacket Included. (Inventory #: AC069)
$1,000.00 add to cart or Buy Direct from
B & B Rare Books
Share this item