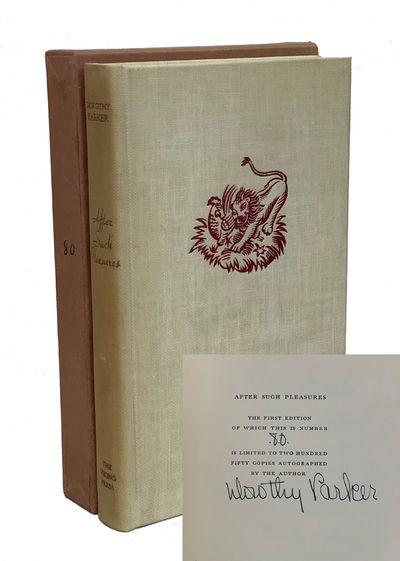 by Parker, Dorothy
New York: The Viking Press, 1933 First edition, one of 250 numbered copies signed by Parker. Publisher's original cream buckram cloth, spine lettered in rose gilt, illustration of a lion and a rooster to front cover, publisher's orange slipcase. A near fine copy, spine a bit toned, else fine; slipcase lightly faded with a few touches of wear. After Such Pleasures is a collection of short stories by Dorothy Parker, best known as a contributor to The New Yorker and founding member of the Algonquin Round Table. Specifically, it includes "Horsie," "Diary of a New York Lady," "Dusk before Fireworks," and "Glory in the Daytime," among others. This first edition is limited to 250 individually numbered copies signed by Parker.. Signed by Author. First Edition. Hard Cover. Near Fine. (Inventory #: DP013)
$1,250.00 add to cart or Buy Direct from
B & B Rare Books
Share this item