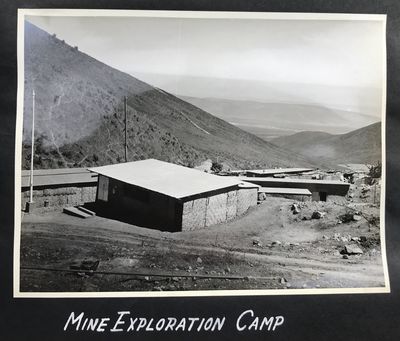 by [South American Photographica]
[Peru, 1958. Very good.. [79] leaves containing seventy-eight silver gelatin photographs, plus fourteen photos laid in. Images 8 x 10 inches; those laid in mostly mounted on cards and slightly larger, some color. Oblong folio. Original leather album, string-tied, cover gilt. Spine moderately worn, corners rubbed. One leaf loose, some wear at edges. Images clean and crisp. Early photographic record of the Hierro Acari Mine in Peru, documenting the site and the initial build. The first leaf contains a manuscript map of the region, and each subsequent leaf has a large, captioned photograph of the area around the mine. Opening with views of planes landing at the airfield, the album takes one on a tour along the roads to the camp with stops such as "Shop Site Preparation" and "Future Crusher Site." Views of the camp and housing follow, such as "Provisional Club and Kitchen," "Muronit House Near Completion," "Staff Restaurant" (which is a cinderblock shell of a building), "Service Station," "Warehouse and Administration Offices," "Provisional Housing of Sub-Contractors," and other similar sites. There are also industrial photos of work in progress: "Drilling at Km. 14+200," "Close Up of Drilling," and an image of the sign on the Pan-American Highway at Km. 515, which reads, "Compañia Explotadora de Hierro Acari / Panamerican Commodities S.A. / Mina de Hierro de Acari Obras en Ejecucion / Ings. Proyectaistas Wells Overseas Ltd." Final images are of the beach and pier. The images laid in at the back are not captioned, though they do show views of industry at the mine, including large machinery and views of the camp and port. The Acari Mine was established in 1958 in the Arequipa region of Peru, near the coast. The area is relatively unpopulated, as shown in the photographs, and the mine created its own little town to accommodate its workers. The Pan American Commodities Company, which operated the mine, was founded in 1951, and was still excavating iron ore from the mine in 1967 -- it is defunct today, though mining is still active in the area. An interesting visual record of mining in Peru in the mid-20th century. (Inventory #: 1558)
$850.00 add to cart Available from
McBride Rare Books
Share this item