Acadian Geology: an Account of the Geological Structure and Mineral Resources of Nova Scotia, and Portions of the Neighobouring Provinces of British America. 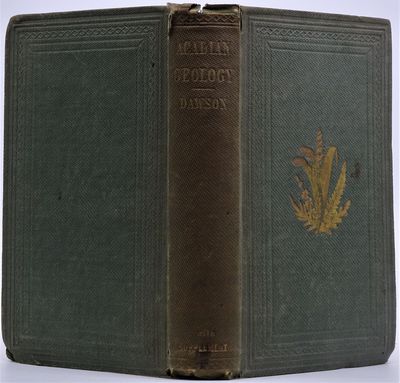 by Dawson, John William (Sir)
Edinburgh: Oliver and Bord, 1855. RARE in the 1855 First Edition, last seen at auction in 1969 (RBH). Original green embossed cloth with gilt floral arrangement front cover and gilt lettering back, large fold-out color map at rear. Very Good Minus, tears to cloth at head of spine, front hinge opened yet holding nicely, map at rear complete and present, but most of map separated from book, with a 2" chip separated but present. Sir John William Dawson, (1820-1899) ws an important Canadian professor of geology and principal of McGill University for 38 years. He was a Canadian pioneer in the field.of the microscopic studies of fossils, the first British North American trained to be an exploration geologist, and worked in Canada with Charles Lyell, the father of modern geology. . First Edition. Embossed Cloth. Very Good Minus/No Jacket, As Issued. 8vo - over 7¾" - 9¾" tall. (Inventory #: 008450)
$850.00 add to cart Available from
Dale Steffey Books
Share this item
Dale Steffey Books
Offered by

A Sanskrit Primer: Based on the Leitfaden Fur Den Elementar-Cursus Des Sanskrit of Professor Georg Buhler of Vienna

Boston : Ginn and Company , 1892
(click for more details about A Sanskrit Primer: Based on the Leitfaden Fur Den Elementar-Cursus Des Sanskrit of Professor Georg Buhler of Vienna)
View all from this seller>