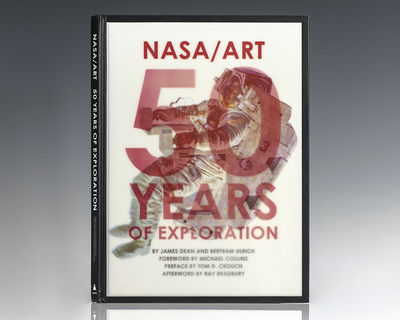 by Jean, James and Bertram Ulrich; Foreword by Michael Collins
New York: Abrams, 2008. First edition of this wonderfully illustrated work on NASA. Quarto, original boards, illustrated throughout. In fine condition. Preface by Tom D. Crouch. Afterword by Ray Bradbury. Artists, like astronauts, are constantly probing into the unknown. It is fitting that, shortly after the establishment of NASA in 1958, the NASA Art Program was created on the principle that artists are uniquely equipped to interpret and document the experience of space exploration. In the program's early years, artists as diverse as Robert Rauschenberg, Andy Warhol, Norman Rockwell, and James Wyeth participated. Over time, the Art Program has commissioned work from many of the world's most distinguished artists. The collection includes works by Alexander Calder, Nam June Paik, William Wegman, Mike and Doug Starn, Vija Celmins, and Annie Leibovitz. (Inventory #: 117843)
$100.00 add to cart or Buy Direct from
Raptis Rare Books
Share this item