Complete Set of the Works of Ernest Hemingway. 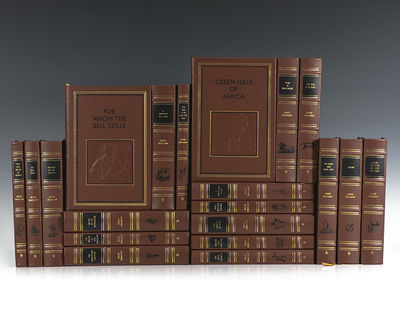 by Hemingway, Ernest
Westport, CT: Easton Press, 1999. Finely bound set of the works of Ernest Hemingway. Octavo, 20 volumes, bound in brown leather, all edges gilt, silk moire endpapers, with embossed image to front boards (each with a different image relevant to the work). In fine condition. Ernest Hemingway was an American journalist, novelist, short-story writer, and sportsman. His economical and understated style--which he termed the iceberg theory--had a strong influence on 20th-century fiction, while his adventurous lifestyle and his public image brought him admiration from later generations. Hemingway produced most of his work between the mid-1920s and the mid-1950s, and he won the Nobel Prize in Literature in 1954. He published seven novels, six short-story collections, and two nonfiction works. Three of his novels, four short-story collections, and three nonfiction works were published posthumously. Many of his works are considered classics of American literature. (Inventory #: 117634)
$2,500.00 add to cart or Buy Direct from
Raptis Rare Books
Share this item