LOVE - LETTERS BETWEEN A NOBLEMAN And His SISTER; With the History of Their Adventures. In Three Parts 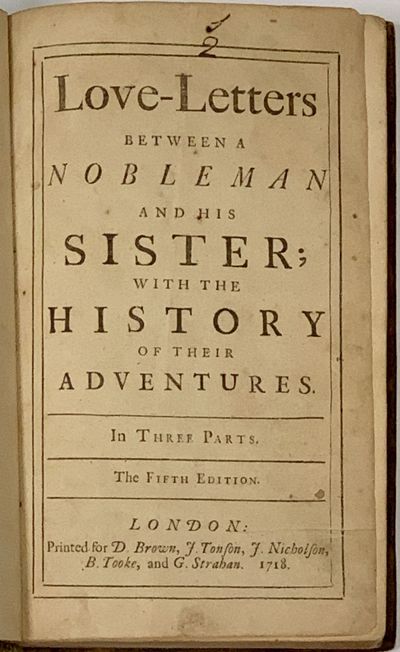 Aphra Behn is considered by many to be England's first professional female writer and she is the first woman whose writing won her burial in Westminster Abbey. . She was probably born in Kent the daughter of Bartholomew & Elizabeth Denham Johnson. She traveled to Surinam in 1663-1664 and married a Dutch merchant who died of the plague in 1665. In 1666 she served as an agent for the British government as she was sent to Antwerp to gather information about exiled Cromwellians and to relay Dutch military plans. She first achieved literary celebrity as a playwrite, entering the theatre in 1760 where she produced more than 17 plays. Her speciality was the "Spanish comedy" of intrigue where she manipulates a number of couples into a complexity of intrigues, mistaken identities, duels, practical jokes and the rest. Her best known play is The Rover (1677) set in Naples. A number of her plays deal with her central theme, an attack on forced marriages. In her later years she wrote fiction, producing more than a dozen novels. In the present work, a woman submits first to incest then to face-saving but degrading marriage. Blain notes: "AB was generous and popular with her peers but often vilified in print. She had more than one lover, some poems hint at love between women. Her works (where sex is as central as in those of her friend Rochester and other contempories) often question expectations about women; the filth so long alleged is not to be found" [Blain. FEMINIST COMPANION, p. 78].According to Viginia Woolf, who, in her "A Room of One's Own", wrote: "All women together ought to let flowers fall upon the tomb of Aphra Behn which is, most scandalously but rather appropriately, in Westminster Abbey, for it was she who earned them the right to speak their minds."This volume publishes love letters purporting to have passed between Ford Grey, Earl of Tankerville and his sister-in-law Henrietta Berkeley (cf. Lowndes Vol III, p. 1402 who so identifies the letter writers).Somewhat uncommon in the trade, with RBH showing 1977 as their last market listing for this title. (Inventory #: 16347.1)
$1,250.00 add to cart or Buy Direct from Tavistock Books
Share this item

Customer Satisfaction guaranteed, and all items guaranteed as described. Returnable for any reason w/i 7 days; prior notice requested and appreciated.Cash with order. Visa, MasterCard, Amex, Paypal, Wire Transfer, Money Order, or personal check. Payable in US dollars against a US Bank. Credit card orders are shipped only to the billing address of the cardholder. ï¿½CA sales tax applied on orders shipped within the state, unless valid resale license supplied.Trade courtesy based on ability to reciprocate.Orders shipped USPS, Insured. Shipping & insurance (w/i US): $5.00 for 1st book of an order [Media Mail]; $1.50 for each subsequent. Oversize volumes a bit extra. Priority Mail beginning @ $10.00. Overseas orders shipped via airpost insured @ cost unless other arrangements made. Other shipping means (e.g., UPS or FedEx) available; please inquire for rates. Best to call to reserve.For our CA customers- the CA Franchise Tax Board requires us to collect CA sales tax on all purchases shipped within the state. This appropriate amount will be added to your transaction total when the order is processed.All descriptions copyright Tavistock Books; unauthorized use is prohibited and violations will be prosecuted to the full extent allowed by statute.
More from this seller
View all from this seller>