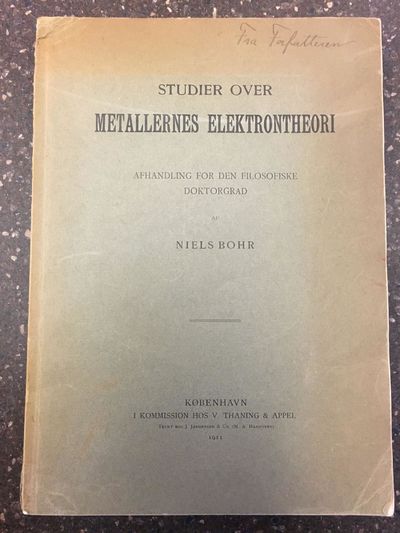 
"Fra Forfatteren," "From the Author," appears in Bohr's hand on the upper right corner of the front wrap.;


shelved case 3. 'Bohr's doctoral dissertation was a purely theoretical work that again exhibited a mastery of the vast subject he had chosen, the electron theory of metals. This theory, which pictures the metallic state as a gas of electrons moving more or less freely in the potential, created by the positively charged atoms disposed on a regular lattice, accounted qualitatively for the most varied properties of metals; but it ran into many difficulties as soon as a quantitative treatment was attempted on the basis of then accepted principles of classical electrodynamics. In order to throw light on the nature of these difficulties, Bohr developed general methods allowing him to derive the main features of the phenomena from the fundamental assumptions in a very direct way. He could thus clearly exhibit the fundamental nature of the failures of the theory, which were in fact attributed to an insufficiency of the classical principles themselves. Thus, he showed that the magnetic properties of the metals could in no way be derived from a consistent application of these principles. The rigor of his analysis gave him, at this early stage, the firm convictions of the necessity of a radical departure from classical electrodynamics for the description of atomic phenomena' [Dictionary of Scientific Biography]. 1332221. Shelved Dupont Bookstore. (Inventory #: 1332221)
$2,400.00 add to cart or Buy Direct from
Second Story Books
Share this item

THE FASCINATING STRANGER AND OTHER STORIES [SIGNED]

New York : Alfred A. Knopf , 1925
(click for more details about RED: PAPERS ON MUSICAL SUBJECTS [SIGNED])
View all from this seller>