Can Such Things Be 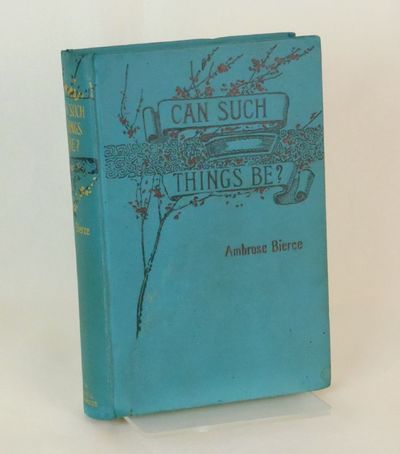 by Bierce, Ambrose
New York: Cassell Publishing Co, 1893. First Edition. Hardcover. Very good +. First printing in book form, duodecimo size, 324 pp. Ambrose Gwinnet Bierce (1842-ca. 1914), a solider by training and profession between 1861 and 1865, serving in the Union army during the Civil War, became one of the leading literary figures of the late 19th century. While some credit his fame to his mysterious disappearance in 1914, after crossing the border into Mexico to observe Pancho Villa's revolution, that view does not do him justice. Subsequent to resigning from the Union army as a major due to battle wounds, he worked briefly at the Treasury Department and then accepted an invitation to join a mapping expedition through what is now the Dakotas, Montana, Utah, and Nevada. He left the expedition in San Francisco and, within a short time, began to publish both fiction and jouranlistic commentary to the many periodicals of the day, including the Overland Monthly, the Argonaut, the Wasp, and the San Francisco Examiner (to name just a few). His success was based partly being "a master of irony and invective" but also on his knowledge of the rigors and horrors of war; he was one of the few to speak against the war with Spain which America entered in 1898. This work, "Can Such Things Be?" contains a selection of short stories which had previously appeared in periodicals, and were likely written between 1887 and 1893. Notable in this collection is the first story, "The Death of Halpin Frayser", which is thought by many to be "Bierce's most remarkable supernatural tale" and is seen as a precursor to zombie fiction. The stories fit into the genre of horror or fantasy, as they deal with the topics of death and terror; however, they are deeper than "mere" horror or fantasy stories, as they spring from his "vivid and unhealed memories of the horrors and carnage he had witnessed in the Civil War" and also his reflections on those experiences in an effort to form a workable life philosophy..."[b]eneath dazzling and ironic surfaces, both his fiction and nonfiction are based on well-thought-out positions and seek to challenge his readers with a serious and deeply moral view of life" (n.b., quotes and information from the online American National Biography). ___DESCRIPTION: Bound in full teal blue cloth over boards, design stamped on the front board in red and black, red and black lettering on the front, gilt and black decoration on the spine, gilt lettering on the spine, rear board with blind decorative and ruled borders; duodecimo size (7 3/8" by 5"), pagination: [i-ii] iii-iv, [1] 2-320. ___CONDITION: Almost near fine, the colours on the front board deep and unrubbed, the gilt on the spine bright, the corners unrubbed, the text block strong with solid hinges, the interior clean other than overall light toning and a spot or two of foxing, and entirely free of prior owner markings; the binding mostly clean with a few light spots of soil, a professional strengthened the head and tail of the spine and the corners (name available upon request), the text block slightly cocked but strong, and some offsetting to the rear endpapers from (apparently) some papers previously having been laid in. An unusually clean and bright copy. ___CITATIONS: BAL no. 1114, with no advertisements at back (apparently as is the case with most or all copies, including the copyright deposit copies), per the BAL there is no priority between the teal blue and yellow bindings; Clute and Grant pp. 110-111. ___POSTAGE: International customers, please note that additional postage may apply as the standard does not always cover costs; please inquire for details. ___Swan's Fine Books is pleased to be a member of the ABAA, ILAB, and IOBA and we stand behind every book we sell. Please contact us with any questions you may have, we are here to help. (Inventory #: 20080801)
$3,850.00 add to cart or Buy Direct from
Swan's Fine Books
Share this item

London : Faber & Faber Ltd , 1929
(click for more details about Ubi Ecclesia)
View all from this seller>