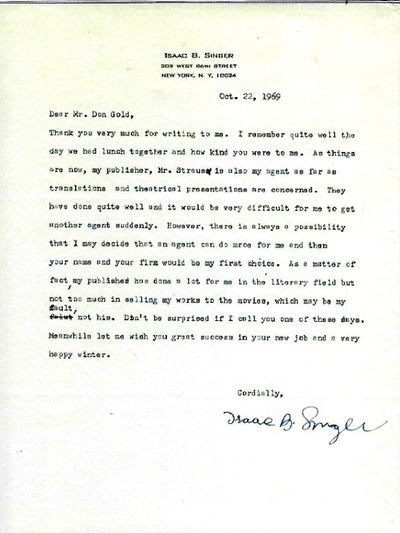 by SINGER, Isaac Bashevis
1969. An interesting letter from Singer on a 5.5- by 7.75-inch sheet on personalized stationery, dated Oct. 22, 1969, to Mr. Don Gold. Singer writes that he remembers having lunch with Gold, who apparently wants to become Singer's new literary agent. "As things are now, my publisher, Mr. Straus, is my agent as far as translations and theatrical presentations are concerned. They have done quite well and it would be very difficult for me to get another agent suddenly." He writes that there is always the possibility he may change agents. "As a matter of fact, my publisher has done a lot for me in the literary field but not too much in selling my works to the movies, which may be my fault, not his." He writes he may call Gold in the future and wishes him well in his new job. A very interesting, insightful letter from Singer, who won the Nobel Prize for Literature in 1978. Letters by Singer are uncommon!. Very nice condition (few minor corrections by Singer in text). (Inventory #: 57120)
$500.00 add to cart or Buy Direct from Antic Hay Books
Share this item
Antic Hay Books
Offered by

THE VOICE OF TRAGEDY

NY : Robert Speller & Sons , 1963
(click for more details about THE VOICE OF TRAGEDY)
View all from this seller>