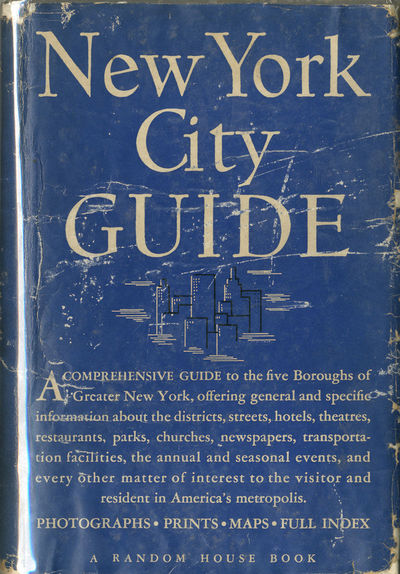 by [WPA - Federal Writers' Project]: [Cheever, John, et al (eds)]
New York: Random House, 1939. xx,680,[2]pp. Blue cloth. Profusely illustrated with 89 photographs, 81 prints and drawings, and 38 maps (including a folding map of Manhattan inserted in pocket tipped in at rear). Dusty at top edge, prior ownership signature and notes in ink and pencil on front free endsheet, bookplate, else very good in price- clipped dust jacket with chips and losses at edges and spine. The jacket has been neatly backed with tissue. Fourth (?) printing of the second edition of this contribution to the WPA American Guide series compiled by workers of the Federal Writers' Project. This edition omits the extra chapter on the World's Fair present in the first edition, and has the numeral '1' inside a box on the verso of the title. This production was sponsored by the Guilds' Committee for Federal Writers' Publications, and is a comprehensive guide to the five boroughs of greater New York. One of the volume's early editorial assistants, John Cheever, said in a letter to a friend that his work on the guide consisted of "twisting into order the sentences written by some incredibly lazy bastards." "The New York City guide is one of the gems of the 'American Guide Series.' The volume is a detailed description of the communities and points of interest in all the five boroughs of New York City. One of the glories of the volume are the numerous pen-and-ink drawings and woodcuts. No other guide has this quantity of drawings. The photographs show a much different city than the New York City of today. Even after [80] years, this guide is invaluable to anyone interested in the 'Big Apple.'" - WPA State Guides, US Senate. SELVAGGIO 415. (Inventory #: WRCLIT81668)
$50.00 add to cart or Buy Direct from
William Reese Co. - Literature
Share this item

A ZIGZAG JOURNEY IN THE SUNNY SOUTH; OR, WONDER TALES OF EARLY AMERICAN HISTORY ... A VISIT TO THE SCENES AND ASSOCIATIONS OF THE EARLY AMERICAN SETTLEMENTS IN THE SOUTHERN STATES AND THE WEST INDIES

Boston : Estes and Lauriat , 1887
(click for more details about A ZIGZAG JOURNEY IN THE SUNNY SOUTH; OR, WONDER TALES OF EARLY AMERICAN HISTORY ... A VISIT TO THE SCENES AND ASSOCIATIONS OF THE EARLY AMERICAN SETTLEMENTS IN THE SOUTHERN STATES AND THE WEST INDIES)

DREAM LIFE: A FABLE OF THE SEASONS

New York : Charles Scribner , 1851
(click for more details about DREAM LIFE: A FABLE OF THE SEASONS)
View all from this seller>