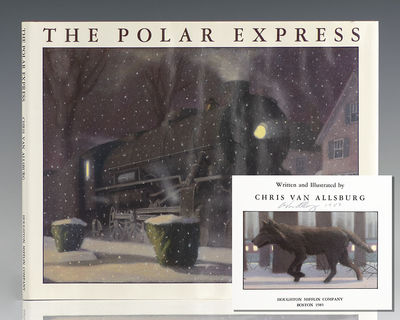 by Van Allsburg, Chris
Boston: Houghton Mifflin Company, 1985. First edition of Van Allsburg's lushly illustrated, enchanting tale of childlike wonder and hope, winner of the 1986 Caldecott Medal. Oblong quarto, original cloth, illustrated throughout. Boldly signed and dated by the author on the title page, "Chris Van Allsburg 1989." Near fine in a fine dust jacket. The Polar Express "clearly established the illustrator-author as one of the premier creators of picture books in 20th-century childrens literature. The Polar Express, immediately taken to heart by children and adults alike, was a phenomenon in childrens publishing. It won the Caldecott Medal for illustration, appeared on the New York Times best seller list, sold more than a million copies in its first five years of publication and achieved the status of a contemporary classic Rich panel illustrations, in blues and purples, are accompanied by a narrative that achieves an exceptional sense of story Van Allsburg touches a universal chord— faith. The simple truth of the story is perceptively conveyed through a felicitous blend of pictures and narrative; the combination radiates with childlike wonder while reverberating with mysterious intensity" (Silvey, 660). It is the basis for the 2004 3D computer-animated film directed by Robert Zemeckis, starring Daryl Sabara, Nona Gaye, Jimmy Bennett, and Eddie Deezen, with Tom Hanks in six distinct roles. (Inventory #: 118343)
$1,500.00 add to cart or Buy Direct from
Raptis Rare Books
Share this item