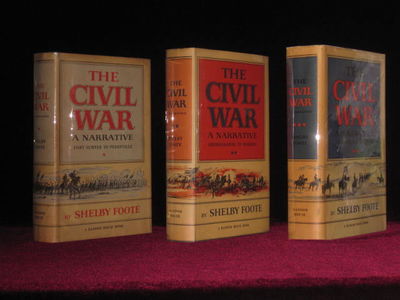 by Foote, Shelby
New York (1958 - 63 - 74): Random House. First Edition. Hard Cover with Dust Jacket. Fine/Very Good. First printings, all in first issue dust jackets. INSCRIBED IN VOLUME II, TO ANNE MERIWETHER. An exceptional set, in 3 volumes: volume I, Ft. Sumter to Perryville, with "11/58" on rear flap of dust jacket and price clipped on the front flap; volume II, Fredricksburg to Meridian, with date of "11/63" on front flap of dust jacket and price clipped; volume III, Red River to Appomattox, with date of "11/74" on rear flap of dust jacket and price of $20.00 on front flap. An exceptional set, internally clean and bright, with no markings of any kind; dust jackets are very good to fine. Volume I with chip to rear panel of dust jacket at fold, not affecting any text; Volume II is inscribed thus: "Anne Meriwether / from Shelby Foote / 1995." Anne Meriwether, was wife of James B. Meriwether (1928-2007). He was author, editor and critic, produced 120 works in 312 publications, in 3 languages; was awarded the Guggenheim Fellowship for Humanities. Shelby Dade Foote, Jr. (1916-2005) rarely signed his books. Most signed copies are signed on a page tipped-in by the publisher - copies signed on the FEP of the book itself, as is the present copy, are quite scarce on the market. This set of 3 volumes was issued over a 16 year period and was well-received and much respected by Civil War buffs. Interest in this work zoomed to the stratosphere, when in 1990, Ken Burns' eleven hour documentary was shown on PBS of "The Civil War." (Inventory #: 09117)
$2,400.00 add to cart or Buy Direct from
Charles Parkhurst Books, Inc.
Share this item
Charles Parkhurst Rare Books, Inc.
Offered by

Shipping costs are extra and will be billed at cost according to customer's shipping preference with tracking availability. For all European countries, please provide a phone number. If by surface, please allow sufficient travel time for arrival. For approximate shipping cost by weight, destination and approximate travel time please contact us. All items are subject to prior sale. If you are interested in an item, we encourage you to inquire promptly. Personal checks must clear prior to shipment. All items sent on approval and have a ten day return privilege for any reason. Please notify us prior to returning. All returns must be properly packaged and insured. All items must be returned in same condition as sent.
More from this seller

Lincroft, NJ : TIA Publications , 1992
(click for more details about THE INTELLECTUAL ACTIVIST. An Objectivist Review. Volume 6, Number 5, September 1992)
View all from this seller>