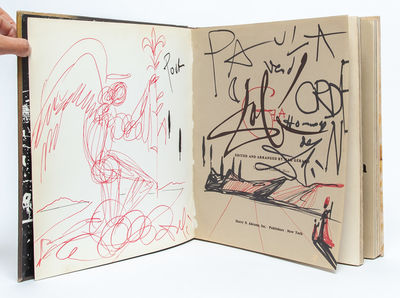 by Dali, Salvador (edited by Max Gerard, translated by Eleanor R. Morse)
New York: Harry N. Abrams, 1968. First edition. Near Fine/Very Good +. Near Fine in a VG+ jacket with several short tears and tape repairs to front joint and lower rear of jacket verso. One of Dali's advance copies, housed in the original cardboard shipping box with forwarding address instructions in his hand. A truly exceptional copy, presented to one of his young New York models at the St. Regis Hotel, Dali writes across the spread of the front endpaper verso and title page: "Pour Paula Van Orden / Homage de Dali." Across these same pages, Dali uses black and red marker to create on the endpaper verso a large depiction of Paula as an angel carrying a fleur de lis while from the title page, the Virgin and young Christ look up at her from an earthly landscape. Provenance: from the collection of Paula Van Orden. A fourteen year old walking her Irish Setter in Manhattan in 1964, Paula Van Orden's accidental run-in with the Argentine jeweler Carlos Alemany would lead her to become one of Salvador Dali's models for the next five years. The "jeweler who spun the surrealistic imagery of Salvador Dali into concoctions of precious metals and stones," Alemany saw in her something that would inspire his collaborator (New York Times). After asking of her familiarity with the artist and learning she particularly loved The Persistence of Memory, Alemany invited her to join him in visiting Dali at the St. Regis Hotel, where he took up annual winter residence in room 1610 "accompanied not only by his wife and muse Gala, but also a bizarre retinue of associates and animals, including his pet ocelot named Babou" (St. Regis Magazine). According to Van Orden, "I regularly modelled for the great Dali at his studio in the hotel for five years," entering into a world of "models and guests...dining with Dali at his favorite restaurant La Cote Basque...discotheques...and posing sessions, always alone with Dali." Though she admits "as a naive young teen I had no hesitation accepting the older man's invitation, one that would dare not be made today," she avers "my innocent trust was not misplaced...an eccentric artist was also a decent man." Regularly depicting her in angelic form with symbolic fleur de lis, Dali's original artwork in this book is an homage to a young woman who inspired him. Near Fine in Very Good + dust jacket. (Inventory #: 3903)
$8,500.00 add to cart or Buy Direct from
Whitmore Rare Books
Share this item

London : T. Cadell in the Strand , 1775
(click for more details about The Morality of Shakespeare's Drama Illustrated (Association copy))

Caste: A Story of Republican Equality

Boston : Phillips, Sampson & Company , 1856
(click for more details about Caste: A Story of Republican Equality)
View all from this seller>