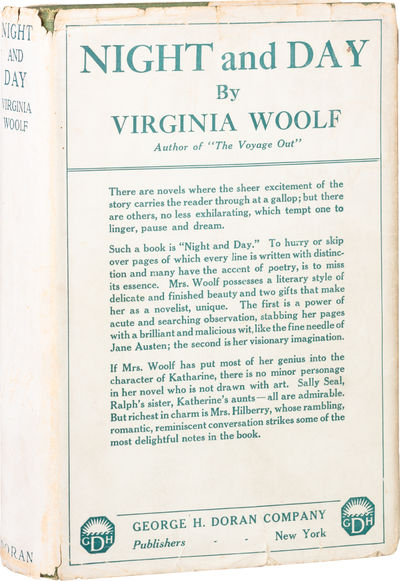 by Woolf, Virginia
1st American edition of her second book, mining Shakespeare's As You Like It. Near fine in a dustjacket with the faint shadow of a number on the spine, corner chips and edgetears, but clean, with no repairs, and more pleasing than doing good in secret and being found out by accident.

In answer to Albee's question, I'm afraid of Virginia Woolf. There's not enough space here, and I'm not smart enough, nor enough of a researcher to tell you much about her that you don't already know, but I'll take my shot at stepping into the shoes of a great lady, and I'll externally consider her for a paragraph attentive to outside events that invaded her inner peace and twisted her life, all because nobody ever told her that detachment is the sure, and only, road to serenity. She was entitled. Her mother was a Pre–Raphaelite model so she got her babeness by gene. Her father was a Sir of letters with a gigantic personal library, and as a result her home–schooled education was an erudite exhibition of late Victorian society (the way of the mouse, symbolic of industry in quiet places). At 13 her mother died, and she crumpled into a (her first) nervous breakdown. She was 18 when the 20th century arrived, so she regrouped, laced her shoes tight and, like most of her generation, met it teeming with hope. But in the background, fate was already icing the stairs, and during the 20th century's first decade the dull were full of themselves, and the bright were full of doubt, so the wealth of the empires (amassed over 5 centuries) was trashed in the woodchipper of W. W. I. Virginia reeled, but she knew that a part of every process is only discipline, so she buffed–up with the competence of stout feminist instincts, and the resolve of The Little Engine That Could, became an exalted author and publisher, surroundedherself with a circle of brilliance, and pursued ideas for their own sake. Then the depression flipped her out, and W.W. II shook the ground beneath her feet (and a German bomb flattened her house), and the pressure inside her spirit began to build (you can hide the fire but you can't hide the smoke), and like the pressure in the atmosphere, she couldn't feel it, but it was still there at 15 pounds per square inch, and mistaking feeling for thinking (the undiagnosed bipolar), and guessing that 59 was old enough, and that coping might be the mesh through which real life escapes, she spit the bit, channeled her inner Billy Joe McAllister, donned an overcoat, filled the pockets with stones, walked into the River Ouse, and never came back.

And on the subject of suicide, I've noticed that hundreds of disheartened souls (hopelessly unable to construct a future) have jumped off The Golden Gate Bridge, and surprisingly, to me anyway, not one of them has worn a cape. (Inventory #: 76832755)
$10,000.00 add to cart or Buy Direct from Biblioctopus
Share this item

.(JavaScript must be enabled to view this email address)
Specializing in First Editions of the Classics of Fiction and High Spots in History, Science and Philosophy

*Every item is guaranteed to be genuine, as described, and way cool, regardless of vintage, but all manuscripts fashioned by the living are particularly burdened with, and isolated by, specific and uneditable disclaimers of warranty. *Everything is deemed to be sold on approval, and may be returned, with notice, within 8 days, for any reason, or no reason, for a full refund. Everything continues to be the lawful property of Biblioctopus until it is wholly paid.
More from this seller

NY : Knoph , 1930
(click for more details about Not Without Laughter)

London : Gibbings , 1896
(click for more details about The Decameron)
View all from this seller>