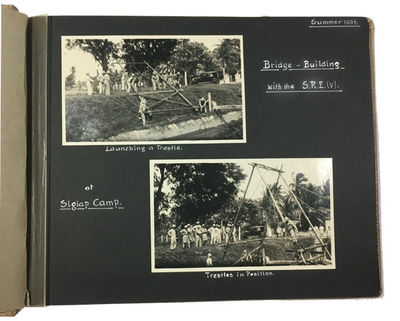 by {Photo Album]
Very Good. 140 almost all of which are high quality amateur photos pasted down, 2-4 to a page, on both sides of 24 black album leaves. All photos, individually or as groups are neatly captioned in white ink. One album leaf is detached. The captions on the first few are in English; thereafter the captions are in German with some English mixed in. The last 4 and almost all of the first 8 are larger (9 x 11 cm. up to 14 x 8 cm.) than the rest of the photos which are generally about 6 x 8 cm. Oblong tied Asian-themed album (23 x 30 cm.) with a pictorial scene on front cover. The compiler appears to have been a Swiss engineer. The album begins with 8 photos of a bridge building exercise in the Summer of 1934 at Siglap Camp for members of the Singapore Royal Engineers (Volunteers). We then see our compiler and some friends in swim suits at the Swiss Club and our compiler at work in his otherwise unidentified office in Singapore. He gets married that winter to someone who appears to be named Selmy. They head off on honeymoon, perhaps to Fraser's Hill. They show off their dogs in Spring of 1935. Nine, probably purchased, photos from Mai 1935 show Singapore buildings illuminated for the Silver Jubilee. Summer 1935 gives us 3 photos of Malayan Pile House, 3 of a Chinese Temple on Ballestier Road. 1 of a Geylang Mosque, and 6 of a small simian named Munie and a larger "cousin." 5 photos from Winter 1935 -- a bridge and lock at Johore and the Gunong Pulei Reservoir. Spring 1936 brings our couple to the British Colony of Sarawak in North Borneo for 19 photos. It also produced 2 photos of Malacca, 3 of Batu Caves, 7 of a return to Fraser's Hill where they stay in Dacres Bungalow. and 3 photos of a tin mine. Our engineer relocates to Penang in Summer 1936 which produces 23 photos of his new office, a visit to Arau and Mr. Graf, perhaps at the Pelarit Estate, flooding in Kangar, the Atar Itam Temple and what appears a stay at the E. & O. Hotel in Penang. Winter 1936 produces some photos of Penang Hill, the Botanical Garden, a few ship and a train, Mr. Graf's tin mine and a Housewarming Party at the Rajah of Perlis. The album ends with 4 photos of Thaipusam (Winter) 1937. (Inventory #: 91204)
$850.00 add to cart or Buy Direct from McBlain Books );
More from this seller

How to Motor with Safety in Pleasure Type Cars

Hartford : The Travelers Insurance Company , 1920
(click for more details about How to Motor with Safety in Pleasure Type Cars)
View all from this seller>