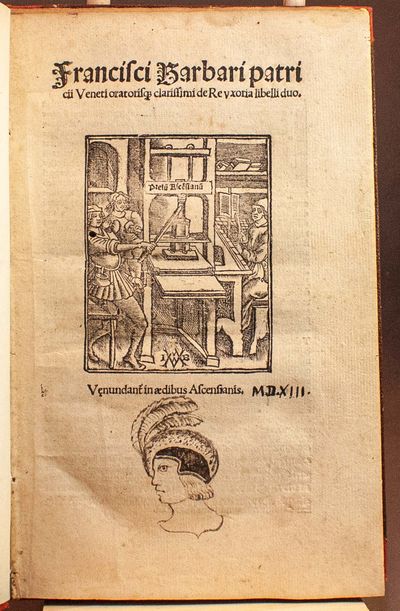 by Barbaro, Francesco; André Tiraqueau.
Paris: Josse Bade, 1513. First edition. First appearance in print of the most influential fifteenth-century treatise on marriage and on the legal status of women, by the Venetian statesman and humanist Francesco Barbaro (1390-1454). This agenda for married women was widely circulated in manuscript for a hundred years prior to this edition. Although manuscripts are present at Yale (Marston Mss 63 and 250 in the Beinecke), OCLC locates the printed edition in only three North American libraries (Bryn Mawr, Illinois, and NYPL).Straddling genres between courtesy book and legal analysis, Barbaro sets a framework for women's obligations, gestures, clothes, speech, and so on. It was composed in late 1415 and given as a wedding gift to Lorenzo de' Medici il Vecchio and Ginevra Cavalcanti. Barbaro, just 26 years old (and unmarried) at the time, composed his book (variously translated as Wifely Duties, On the Matter of Wives, and more recently, by Margaret King, as The Wealth of Wives), following the completion of his legal studies. King postulates convincingly that the title calls back to the canon-law idea of res uxoria, or dowry; that Barbaro turns the legal precept around, arguing that a wife's real value is not counted in "ducats and trinkets," but by the value her of character and bearing. This was a new and fairly iconoclastic view in 1416, though we should not consider Barbaro's work any kind of feminist manifesto or call to recognize women's rights. Barbaro states unequivocally that the cardinal directive in a noble family is to produce more nobles, and that the duty falls first upon the man, in his choosing of a bride, and second, upon the wife, who, by her virtue (as well as her ability to remain quiet and motionless in public and her initial condition of virginity) will pass along through gestation and lactation these same character traits to a new generation of nobles. The narrative is framed as though directed to a prospective wife.For this first printed edition, the text was edited by André Tiraqueau (1488-1558), at the time a young and newly married jurisconsult who was to establish himself as one of the leading legal scholars of France, and was a close friend of Rabelais, who refers to him (in Pantagruel) as "the good, learned, wise, and so human, so fair, so elegant André Tiraqueau.". Quarto (21cm); 33 [1] leaves (last blank); text in roman, first line of title and headlines in large gothic; Badius's first device, representing a printing press (Renouard 22) on title; criblé initials. Early 20th-century binding of pebbled cloth over thin boards, twice titled in manuscript on paper spine labels. Slight wear to extremities, small divot in head edge of upper board, part of one spine label peeled away. Interior: Minor soiling; single wormhole pierces text block, touching printing; a few leaves at end rounded at head fore-corners; conjugate A1-8 guarded inside gutter; Roman date added in later manuscript to title. Small ink drawing of a nobleman wearing a feathered cap at base of title page. References: Renouard, Badius II, p. 144; Moreau II, #496; Margaret L. King, ed. and tr. Francesco Barbaro, The Wealth of Wives: A Fifeenth-Century Marriage Manual. Toronto: Iter Academic Press, 2015. (Inventory #: 6198)
$6,200.00 add to cart Available from
Rodger Friedman Rare Book Studio
Share this item
Rodger Friedman Rare Book Studio
Offered by

The Indian tribes of North America.

Washington : Government Printing Office; Bureau of American Ethnology , 1952
(click for more details about The Indian tribes of North America.)
View all from this seller>