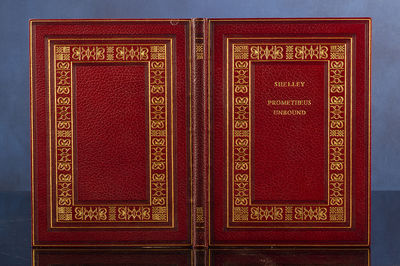 by SHELLEY, Percy Bysshe; ESSEX HOUSE PRESS; ASHBEE, J.R. artist; FARGE, Marie-Louise, binder
London: [Essex House Press] Edward Arnold , 1904. Essex House Press Prometheus Unbound In a Fine Designer Binding by Marie-Louise Farge SHELLEY, Percy Bysshe. [ESSEX HOUSE PRESS]. ASHBEE, C.R., artist. FARGE, Marie-Louise, binder. Prometheus Unbound. A Lyrical Drama. Printed at Essex House, Campden, Gloucestershire, under the care of C.R. Ashbee. London: Edward Arnold, 1904. Limited to 200 copies on paper of which this is no. 96. Folio (11 1/2 x 8 3/8 inches; 293 x 213 mm.). [iv], 96 pp. Printed in 'Prayer Book' type in black and red. Woodcut frontispiece by C.R. Ashbee, lettered in red. Specially bound ca. 1925 by Marie-Louise H. Farge (stamp-signed in gilt on front turn-in). Full maroon crushed levant morocco, covers multi-bordered in blind and richly decorated in a fine gilt design, front cover lettered in gilt. Smooth spine decorated and lettered in gilt, wide decorative gilt turn-ins, hand-made marbled endpapers, top edge gilt, others uncut. Housed in the original fleece-lined, beveled-edge brown cloth slipcase. A very fine copy. Prometheus Unbound is a four-act lyrical drama by Percy Bysshe Shelley, first published in 1820. It is concerned with the torments of the Greek mythological figure Prometheus, who defies the gods and gives fire to humanity, for which he is subjected to eternal punishment and suffering at the hands of Zeus. It is inspired by the classical Prometheia, a trilogy of plays attributed to Aeschylus. Shelley's play concerns Prometheus' release from captivity, but unlike Aeschylus' version, there is no reconciliation between Prometheus and Jupiter (Zeus). Instead, Jupiter is abandoned by his supportive elements and falls from power, which allows Prometheus to be released. Shelley's play is a closet drama, meaning it was not intended to be produced on the stage. In the tradition of Romantic poetry, Shelley wrote for the imagination, intending his play's stage to reside in the imaginations of his readers. However, the play is filled with suspense, mystery and other dramatic effects that make it, in theory, performable. "On 11 March 1818 the Shelleys and Claire left England to take Claire's daughter, Allegra, to her father Byron, who had taken up residence in Venice...He then began the long verse drama Prometheus Unbound, a re-writing of the lost play by the ancient Greek poet Aeschylus, which features talking mountains and a petulant spirit who overthrows Jupiter... The Shelleys moved between various Italian cities during these years; in later 1818 they were living in Florence, in a pensione on the Via Valfonda. Shelley completed Prometheus Unbound in Rome, and he spent mid-1819 writing a tragedy, The Cenci, in Leghorn (Livorno)." (Wikipedia). Charles Robert Ashbee (1863-1942) was a British architect and designer who was a prime mover of the Arts and Crafts movement that took its craft ethic from the works of John Ruskin and its co-operative structure from the socialism of William Morris. Ashbee set up his Guild and School of Handicraft in 1888 in London, while a resident at Toynbee Hall, one of the original settlements set up to alleviate inner city poverty, in this case, in the slums of Whitechapel. The fledgling venture was first housed in temporary space but by 1890 had workshops at Essex House, Mile End Road, in the East End, with a retail outlet in the heart of the West End in fashionable Brook Street, Mayfair, more accessible to the Guild's patrons. The School closed in 1895, which Ashbee blamed on "the failure of the Technical Education Board of the L.C.C. to keep its word with the School Committee and the impossibility of carrying on costly educational work in the teeth of state aided competition." The following year the L.C.C. opened the Central School of Arts and Crafts. In 1902 the Guild moved to Chipping Campden, in the picturesque Cotswolds of Gloucestershire, where a sympathetic community provided local patrons, but where the market for craftsman-designed furniture and metalwork was saturated by 1905. He was a member of the Order of Chaeronea, a secret society founded by penal reformer and poet George Cecil Ives in 1897 for the cultivation of a homosexual ethos. To conceal his sexuality at a time when homosexuality was illegal, Ashbee married the accomplished musician Janet Forbes in 1898 and had a rather progressive, atypical marriage resulting in four daughters. The pair wrote a collaborative journal and Janet became a valued member of the Arts and Crafts community, embracing the wider socialist concepts of the movement by setting up a craft cooperative with her husband. Ashbee also espoused the work of Edward Carpenter, philosopher of the simple life and early gay rights campaigner, who he considered his mentor. (V & A). Marie-Louise Farge (fl. 1890-1939) was quoted first by Crauzat as a young woman bookbinder and then by Fléty in the Decorators and Bookbinders section as an amateur who participated in exhibitions between 1890 and 1939, so we can conclude that Marie-Louise Farge was already active from 1925. In a 1937 issue of the journal Arts et Métiers Graphique, Alphonse-Jules Gonon, former publisher and having become a bookbinder himself, we learn that Madame Farge does everything in her studio, from papers to gilding. Her style elegantly combines a certain fin-de-siècle archaism with a very modern sensibility that perfectly suits this "lyrical drama".   Tomkinson. A Select Bibliography of the Principal Modern Presses... p. 75 (Essex House Press # 43); Ransom, Essex House Press #43; Franklin. The Private Presses p. 200. (Inventory #: 04935)
$1,950.00 add to cart or Buy Direct from
David Brass Rare Books
Share this item

The History of Japan: Giving an Account of The antient and present State and Government of that Empire;

London: Printed for the Publisher, and sold by Thomas Woodward... and Charles Davis, 1728
(click for more details about The History of Japan: Giving an Account of The antient and present State and Government of that Empire;)

History of the Abbey Church of St. Peter's Westminster

London: R. Ackermann, 1812
(click for more details about History of the Abbey Church of St. Peter's Westminster)
View all from this seller>