Microcosm of London; or, London in Miniature, The 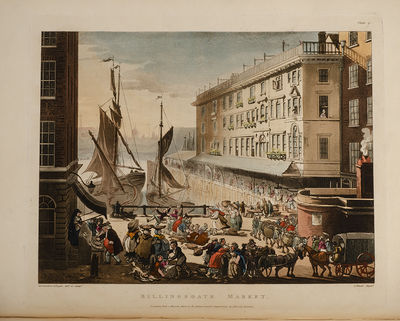 first edition
by ACKERMANN, Rudolph; COMBE, William; PUGIN, Augustus; ROWLANDSON, Thomas
London: R. Ackermann's Repository of Arts, 1808. With Nine (Possibly Ten) of Abbey's Twelve Key Plates in Their First "Luminous" State [ACKERMANN, R[udolph]. The Microcosm of London; or, London in Miniature]. London: R. Ackermann's Repository of Arts, [1808-1810]. First edition, early issue, with nine (possibly ten) of Abbey's twelve key plates in their first state. Text watermarked 1806-1807 and plates watermarked 1805-1808, and with the errata uncorrected, except for that reading "coustom" for "custom" on p. 218 of Volume I (see Abbey, Scenery, p. 138). Three large quarto volumes (12 7/8 x 10 11/16 inches; 327 x 271 mm.). iv, 1, contents], [1, blank], [3]-231, [1, blank]; [iii]-vi, [1, contents], [1, blank], 239, [1, blank]; [iii]-iv, [1, contents], [1, publisher's note], 280, [6, index and errata] pp. Half-titles. present. Woodcut title and engraved dedication leaf in each volume. With 104 hand-colored aquatint plates, including fifty-four by J. Bluck, twenty-nine by J.C. Stadler, ten by T. Sutherland, ten by J. Hill, and one by Harraden, after Rowlandson and Pugin. First state of Abbey's key plates 1, 3, 4, 5, 6, 7, 9, and 10, with plate 8 uncertain as noted by Abbey. Contemporary full tree calf. Gilt-tooled borders. Spines neatly rebacked to period style. Five compartments with crimson and green morocco labels and gilt ornaments. Four gilt-tooled raised bands. Some offsetting to opposing leaves. An extraordinary copy of a book scarcely seen with all half-titles and nine (possibly ten) of the twelve key plates in first state. "The [book's] striking feature is not so much the text (though the third volume is notable as the work of W. Combe) but the coloured illustrations, in this case the combined work of Pugin and Rowlandson...The pictures in this book cover all the well-known public buildings of London-churches, banks, prisons, theatres, etc.,-capitally portrayed by Pugin...The great metropolis, with its high life and low, its light and its shade, could have had no one better fitted [than Rowlandson] to portray its inmates. The spirited figures that he adds to Pugin's backgrounds show that his talents were not limited to the ludicrous and grotesque. With the happiest faculty for expressing character, he is equally at home amid a serious discussion of naval policy at the Admiralty Board-Room, or among the excited, gambling crowd of the Royal Cockpit. At Westminster Abbey or Bridewell, the College of Physicians or Billingsgate, everywhere he has seized on the essential features and the typical frequenters of the place...The book is a living and delightful record of the old metropolis of [two] hundred years ago, the London of Lamb, Jane Austen, Dickens, and Thackeray, of places and incidents that are now mere memories" (Martin Hardie, pp. 101-102). "The 'Microcosm of London' is one of the great colour-plate books, and a carefully selected copy should form the corner stone of any collection of books on this subject. The plates by Rowlandson and Pugin present an unrivaled picture of London in early 19th century, of historic value, as many of the buildings no longer exist" (Tooley). Early impressions are particularly prized: "original impressions of these splendid plates have a luminous quality entirely absent from later printings" (Abbey). Abbey, Scenery, 212. Adams, London Illustrated, 99. Martin Hardie, pp. 100-103. Prideaux, pp. 121-124 and 348. Tooley 7. (Inventory #: 04936)
$13,500.00 add to cart or Buy Direct from
David Brass Rare Books
Share this item

The History of Japan: Giving an Account of The antient and present State and Government of that Empire;

London: Printed for the Publisher, and sold by Thomas Woodward... and Charles Davis, 1728
(click for more details about The History of Japan: Giving an Account of The antient and present State and Government of that Empire;)

History of the Abbey Church of St. Peter's Westminster

London: R. Ackermann, 1812
(click for more details about History of the Abbey Church of St. Peter's Westminster)
View all from this seller>