The Adventuress or, A Tale of Parisian Life. A Romance with a Moral - The Acme of Realistic Fiction. From the French of Charles Aubert 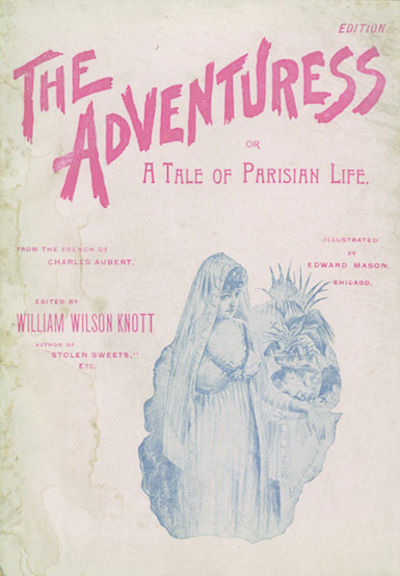 by [PULP FICTION]. Knott, William Wilson
Chicago: The Stein Company, 1902, 1902. First edition. OCLC records five copies (OSU, Chicago, Stanford, Northern Illinois and Penn). Paper browned; wrappers somewhat stained around the edges; a good, sound copy.. 8vo, original pictorial wrappers, 363 pages. One of about twelve recorded works of fiction by Chicago author William Wilson Knott, all classic examples of the pulp fiction genre that flourished during the 1890s. Little is known about Knott, other than that he resided in Chicago between about 1890 and 1910 and issued most of his works under the general title "Bow-Knot Series" published by the Bow-Knot Publishing Company. In another work, His Fatal Wager, Knott wrote a long preface, in which he details his beginnings in Chicago and time he spent in prison for sending obscene literature through the mail. This copy is a duplicate from the Ohio State University Pratt Circulating Library collection. The duplicates were consigned to Serendipity Books in the late 1990s. (Inventory #: 27460)
$75.00 add to cart or Buy Direct from
Brick Row Book Shop
Share this item