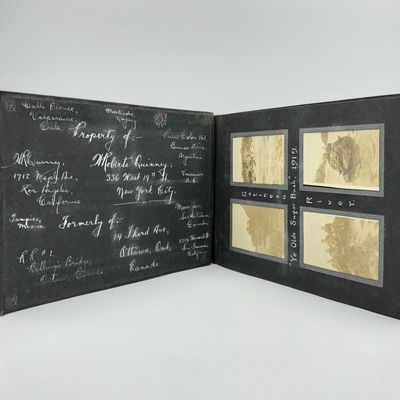 Album
by Quinney, Harold Roberts "Bobs" (1900-72)
Album. Very good. An elaborately annotated photo album created by Harold Roberts "Bobs" Quinney (1900-72) chronicling his life between 1919 and 1923, including his move to the United States from Ottawa, Ontario, Canada, travel aboard a merchant ship, life in New York, and his home in Los Angeles. The album is filled with 192 black and white images measuring 2 x 2 1/2". Each of the images is held in place with black paper inset matting and accompanied by handwritten captions written in white pencil. The photo album opens in 1919 with Quinney's trip to New York. There are four photos showing a large gathering of military on the street labeled "the homecoming 1919" referring to soldiers returning from World War I, pictures of the Bronx Zoological Park, Grant's Tomb, Coney Island, and other New York sights. In 1920, it would appear he joined the crew of a Standard Oil tanker and visited Mexico, the Brazilian Coast, and Argentina. A series of 12 photos show travel through the Panama Canal. The album also contains photographs of family and friends, then transitions in 1922 to images of Southern California, where he took a job as a drug clerk and officially emigrated to the U.S. According to ancestry records, Quinney was one of 11 children. He married in 1926, moved to San Francisco and graduated from dental college. The oblong black buckram album and photographs are in very good condition and provide a pictorial story of one young man's new life in America. (Inventory #: 71752)
$200.00 add to cart Available from Johnson
Share this item


(click for more details about HANDWRITTEN NOTE AND MEETING INVITATION)