THE DRAMATICK WORKS OF GEORGE COLMAN 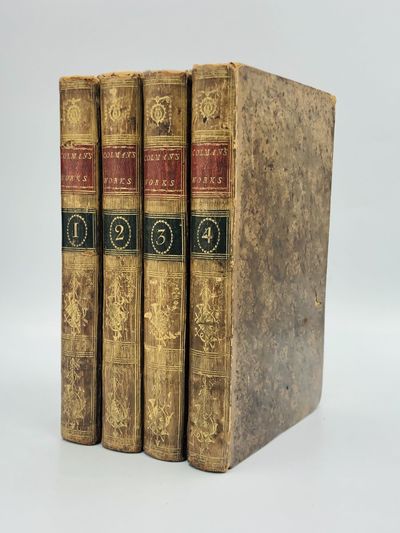 by Colman, George, the Elder (1732-94)
London: Printed for T. Becket, 1777. Hardcover. Very good. The son of a British diplomatic envoy, Colman (1732-1794) attended Christ Church, Oxford where he studied law and with parodist Bonnell Thornton, founded The Connoisseur (1754-56). In 1760, he produced his first play, Polly Honeycomb, which met with great success. A year later, The Jealous Wife, a comedy partly founded on Tom Jones, made Colman famous. Later, he purchased a share in the Convent Garden Theatre. During his seven-year tenure as acting manager, he produced several "adapted" plays of Shakespeare and directed Mary Bulkley, Ann Catley, and others in the premier of Oliver Goldsmith's She Stoops to Conquer in 1773. Published during his lifetime, this edition was dedicated to Colman's patron, William Pulteney, 1st Earl of Bath, and includes sixteen of his dramatic works, among them The Clandestine Marriage, his collaboration with David Garrick. Octavo, four volumes. Period tree calf bindings, with red and black leather spine labels, decorative gilt stamping, and marbled endpapers. The period bookplate of merchant Thomas Conway of Hart Street, Bloomsbury appears on each front pastedown. Tiny ink checkmarks to the title pages. Faint staining to the bottom edge of the first two volumes, with some negligible worming to the prefatory leaves, front joint, and spine of the first volume. Tiny bookseller's label to the front pastedown in the first volume. General dust staining to the top edges. The spines are a little dry, with a bit of wear to the corners and tips; else very good. (Inventory #: 71738)
$250.00 add to cart Available from Johnson
Share this item

WALT DISNEY: The Art of Animation - The Story of the Disney Studio Contribution to a New Art

by Thomas, Bob with the Staff of the Walt Disney Studio

New York : Golden Press , 1958
(click for more details about WALT DISNEY: The Art of Animation - The Story of the Disney Studio Contribution to a New Art)
View all from this seller>