AMERICAN MUSEUM. CORNER OF BROADWAY AND ANN- STREET, UNDER THE MANAGEMENT OF MR. P.T. BARNUM...A SHORT ENGAGEMENT WITH A COMPANY OF INDIAN WARRIORS! AND THEIR SQUAWS! 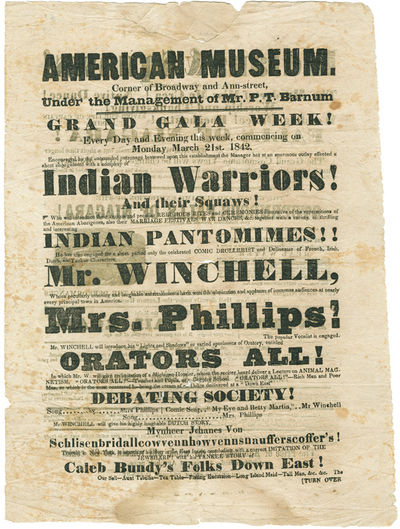 by [Barnum. P.T.]
[New York]: Wm. Applegate' Steam Presses, 1842. Letterpress broadsheet, 12 x 8 3/4 inches. Small engraving of Niagara Falls on verso. Moderate edge wear, a few closed tears and minor fold separations with expert tissue repairs. Light foxing and staining. Good condition. An exceedingly rare broadsheet handbill advertising P.T. Barnum's groundbreaking 1842 western show featuring Native Americans in a variety of performances. Issued quite early in Barnum's career, shortly after he opened his American Museum in New York, the broadsheet promises a wide variety of natural and mechanical wonders "exhibited in six spacious halls, each one hundred feet in length." While Wild West shows are often associated with Buffalo Bill Cody, the present broadsheet was issued five years before Cody's birth, and the year before P.T. Barnum's landmark "Grand Buffalo Hunt" in Hoboken, which is generally considered the first of what would later become the Wild West Show. P.T. Barnum - one of the most successful showmen in history - here stages a proto-Wild West show in his Broadway museum, the type of western show that would become ubiquitous in theaters, performance halls, and outdoor venues a generation later. Here, Barnum employs "Indian Warriors! And their Squaws! Who will introduce their various and peculiar Religious Rites and Ceremonies illustrative of the superstitions of the American Aborigines, also their Marriage Festivals, War Dances, &c. together with a variety of thrilling Indian Pantomimes!!" The show also involved Native Americans "in a Scenic representation of The Murder of Miss McCrea! Native Dance! Worship and Thanksgiving! Wedding Dance! Pocahontas! Saving the Life of Captain Smith." The "Miss McCrea" mentioned here refers to Jane McCrea, who was killed by Wyandot warriors in upstate New York in 1777 while on her way to meet her fiancé, who was serving in General John Burgoyne's army during the Saratoga campaign. Burgoyne himself had engaged the Indians to attack American troops that were harrying the British army along their route, but this plan backfired spectacularly when they began also to attack and to kill civilians, including many erstwhile loyalists like Jane McCrea. The particular circumstances of McCrea's death sensationalized the story, and helped to turn many previously loyal New Yorkers against the British cause. The entire episode was one of many misadventures for Burgoyne in upstate New York that eventually led to his surrender at Saratoga. The McCrea murder was adapted into fiction and art, and obviously into stage productions, as seen here. In addition to the Native American show, Barnum advertises a comedian, singers, a pneumatic railroad, an albino woman, "fancy glass working," and a "Grand Cosmorama." Notice of a "grand and sublime exhibition of the stupendous falls of Niagara" features a small woodcut of Niagara Falls, with a note that "real water" would be used to "make the subject perfect." Appealing to the large population of New Yorkers of Dutch heritage, another act describes a "highly laughable Dutch story" in which the protagonist searches for his son in the East Indies. Admission was twenty-five cents for adults, half that for children under ten. A very rare and early Barnum broadsheet, issued just three months after the opening of the showman's legendary American Museum, with no copies in OCLC. (Inventory #: WRCAM55898)
$4,750.00 add to cart or Buy Direct from
William Reese Co. - Americana
Share this item