[MANUSCRIPT GENERAL STORE LEDGER FROM A LONG- LOST TEXAS GHOST TOWN, KEPT BY A PROMINENT CITIZEN AND INCLUDING TRANSACTIONS WITH SEVERAL MEXICAN-AMERICAN CUSTOMERS] 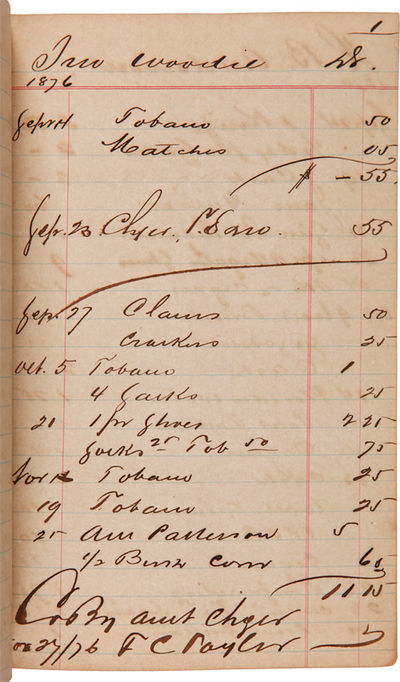 by [Texas]
[Ben Ficklin, Tx, 1877. [11],91pp. 12mo. Contemporary black calf, front board stamped in gilt. Minor edge wear and rubbing to boards, spine partially perished, hinges cracked and a bit tender. Minor toning to text. Good condition. An informative general store pocket ledger from the 19th-century settlement of Ben Ficklin, Texas. The town of Ben Ficklin or Benficklin was first settled in 1868 by Major Benjamin Ficklin near San Angelo in west- central Texas, as a stop on the San Antonio- El Paso mail line. It became the county seat of Tom Green County in 1875 and soon had a population of 600 residents, but was effectively wiped out by a West Texas flash flood in August 1882. This small ledger was kept at a general store that was apparently co-owned by Francis Corbett Taylor (1822-79), a Confederate veteran who was Tom Green County's first judge, a former business partner of Major Ficklin, and one of the town's co-founders. He signed the ledger "F.C. Taylor" on the first page, and his personal accounts on pages 46-47 seem to allocate his share of the profits and expenses. One of Taylor's partners was his nephew Charles B. Metcalfe (1856-1941), who signed pages 59 and 62; at age 20 Metcalfe had already been elected county commissioner, and later became an important rancher. Goods sold at Taylor's general store and noted here include tobacco, matches, toothbrushes, knives, whiskey, coffee, beer, shoes, paper, candy, crackers, patent medicine, pickles, Mexican blankets, and much more. Many of the store's customers had Spanish names such as Santiago Vaisa, Jose Paredes Sr., Chon Rodrigues, Cesario Delgado, Pedro Paredes, Ancelmo Medrano, Alvino Gomez, Julian Ramires, and many others, attesting to the strong Hispano-American population in the region. A customer named Jack Smith was likely Native American (or worked for a local tribe), as he is noted in the ledger as "Stocktender, Kickapoo." On page 22 is an account for office supplies sold to Tom Green County. Two years after the end of this ledger, proprietor F.C. Taylor died and was buried in the Ben Ficklin Cemetery. Three years after that, he was disinterred by the flood that washed Ben Ficklin off the map. Major Benjamin Ficklin was a fascinating character in mid-19th-century American life. He was a graduate of the Virginia Military Institute; veteran of the Mexican-American War; teacher; participant in Albert Sidney Johnston's expedition to Utah to settle trouble with the Mormons; general superintendent of the Central and Overland California and Pike's Peak Express Company (and generally known as the originator of the Pony Express); Virginia state quartermaster general, blockade runner, and Confederate staff officer during the Civil War; organizer of the John B. Floyd Brigade; purchasing agent for the Confederate government in Europe; and suspect in Abraham Lincoln's assassination (but released a few months later). "After the war Ficklin received a government contract for a weekly mail service from Fort Smith, Arkansas, to San Antonio, Texas, with a branch line to El Paso. He established the Concho Mail Station, headquarters for his stage operations, near the site of Fort Concho, in what is now Tom Green County. The stage stand grew into the community of Ben Ficklin, the county seat of Tom Green County in 1874" - Handbook of Texas. This ledger is likely one of the few surviving documents from this short-lived West Texas settlement, and an important source for studying the Texas frontier economy. NEW HANDBOOK OF TEXAS, p.990. (Inventory #: WRCAM55881)
$3,500.00 add to cart or Buy Direct from
William Reese Co. - Americana
Share this item