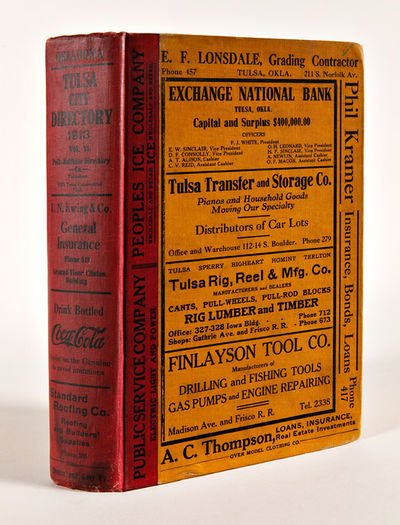 by [Oklahoma]
[Tulsa]: R.L. Polk & Co., 1913. 681pp., plus one ad leaf. Original half red printed cloth and yellow printed cloth boards, edges of textblock printed with ads. Minor edge wear and soiling to boards, corners bumped. Ex-Library of Congress, with bookplate on front pastedown, small stamp on verso of titlepage and rear free endpaper, small bookseller ticket on rear pastedown. In very good condition, better than usually seen for directories of this period. An early Tulsa directory, being the sixth city directory published by the Hoffhine Directory Company, and the first in partnership with R.L. Polk. The directory opens with a fourteen-page advertising section touting a wide range of products and services, including Tulsa Business College, Quuen Bee Gas Stoves, Oklahoma Iron Works, Tulsa Cotton Oil Company, and others. An introductory note reports the population of Tulsa in 1913 as 33,990, an increase of 5,880 over the previous year's number. A short section on the major governmental contacts, banks, churches, and other notable organizations is followed by the main section of the directory containing an alphabetical listing of the residents and commercial entities of the city. This is followed by a street directory organized alphabetically. Greenwood Avenue, the section of north Tulsa most impacted by the Tulsa Race Riots eight years later, lists several businesses (and presumably residents) that would eventually be lost to the riots, such as the African Methodist Episcopal Church (destroyed in 1921 and rebuilt in 1928), the Peoples' Theatre, and three businesses and the residence of pioneering Tulsa African-American businessman Ottaway W. Gurley, among others. Gurley owned about a hundred buildings in the Greenwood area at the time of the race riots, and he lost most of them in the carnage. The directory includes two pages listing businesses and residents along Greenwood Avenue (and other streets in the area that was known at the time as "Black Wall Street"), with most entries followed by "(c)" indicating presumably that a "colored" person lives or works there. The street directory is followed by an alphabetical directory of "Tulsa County Tax Payers and Their Postoffice Address" and then "Hoffhine's Tulsa Classified Business Directory," comprised of a listing of businesses organized alphabetically by type. These include architects, automobile dealers, booksellers, drilling contractors, oil and gas companies, hotels, theaters, and more. This is an early and rare Tulsa directory, with important content related to the later Tulsa Race Riots. OCLC lists just two institutions with any holdings of this Tulsa directory after the merger of Polk and Hoffhine in 1913 and the cessation of publication in 1922 - Yale (which only holds the 1920 edition) and the Tulsa City-County Library (which holds this edition and a few others). OCLC 11209718. (Inventory #: WRCAM55880)
$1,250.00 add to cart or Buy Direct from
William Reese Co. - Americana
Share this item