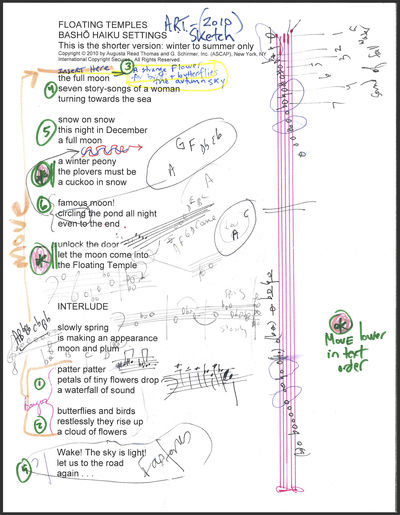 Printed haikus, each numbered in manuscript, some with additional sketches of pitch content, both notated and not. Single staff hand-ruled in pink across right side of the page.

Some wear and creasing; ca. 2" x 1" portion lacking to lower margin, not affecting text. Floating Temples was premiered on 15 April 2011 by the University of Arkansas Symphony Orchestra and Chorus under Robert Mueller.

The text of the work is taken from "fragments from Haiku by Basho (1644 ­1694) along with suspended fragments from poems by Gerard Manley Hopkins (1844 ­1889), rearranged and created into a wholly new lyric by Augusta Read Thomas." The composer's website