Brio for orchestra. Autograph map of form with sketches 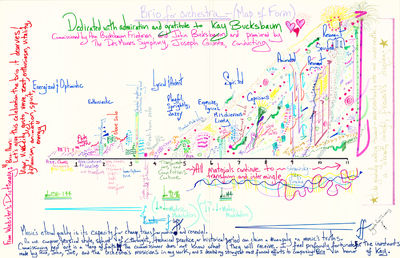 Map of form anchored by timeline in black extending horizontally across the center numbered from [0] to "11." Above the timeline, a colorful graphic representation of an increasingly complex musical cresecendo depicted through dots, bubbles, lines, squiggles, stars, and rhythmic patterns in various bright colors, increasing in both size and complexity from left to right, with some written descriptions of musical character and instrumentation; below the timeline, textual and graphic descriptions of musical progression through articulations and musical form with added tempo, dynamic, and specific metrical notes.

Composer's autograph notes across lower and side margins:
- Left margin: "From Webster's Dictionary: 'Brio: Noun: Let's give this celebration the brio it deserves! Vigor, Vivacity, gusto, verve, zest, enthusiasm, vitality, dynamism, animation, spirit, energy."
- Right margin: "Like gradually walking toward and eventually into and underneath a vibrant, colorful, fireworks display."
- Lower margin: "Music's eternal quality is its capacity for change, transformation and renewal. No one composer, musical style, school of thought, technical practice, or historical period can claim a monopoly on music's truths. Comissioning new art is a leap of faith!! The commissioner does not know what they will receive. I feel profoundly fortunate for the investments made by Ann, John, Joe, and the Orchestra's musicians in my work, and I devoted my strongest most focused efforts to composing Brio in honor of Kay."

- Leaf 1
"Six chords" to head of page with "Des Moines Symphony/Orchestral Dances" below. Signed by composer at lower right corner "Messy Sketch Augusta Read Thomas" with dedication and date to upper left corner "Brio for Kay 2017." On 8-stave Judy Green M-311 ivory music paper. Notated in magenta ink with yellow and blue highlighting, corrections in red and black. Each of six chords notated as a scale and numbered. With additiona text regarding the work's total duration and conception. Some wear and creasing; minor tears to right edge.

- Leaf 2
"Brio Sketch / chords toward end of piece" at upper left corner. Initialed and dated by composer at lower right corner "ART 2017." Notated in blue ink on a single large, hand-ruled grand staff with six chords (a seventh crossed out). With light blue, yellow, and purple highlighting and corrections and excisions in red and black ink. Lower edge ragged. Brio premiered on 24 March 2018 by the Des Moines Symphony under Joseph Giunta.

"I care about craft, clarity, and passion. My works are organic and, at every level, concerned with transformations and connections. The carefully sculpted musical materials of Brio are agile and energized, and their flexibility allows a way to braid harmonic, rhythmic, and contrapuntal elements that are constantly transformed - at times whimsical and light, at times jazzy, at times layered and reverberating. Across Brio's 11-minute duration, it unfolds a labyrinth of musical interrelationships and connections that showcase the musicians of the Des Moines Symphony in a virtuosic display of rhythmic agility, counterpoint, skill, energy, dynamic range, clarity, and majesty. Throughout the kaleidoscopic journey, the work passes through many lively and colorful episodes and, via an extended, gradual crescendo, reaches a full-throttle, sparkling intensity - imagine a coiled spring releasing its energy to continuously propel the musical discourse. Vivid, clangorous, brassy, and blazing, Brio culminates in music of enthusiastic, intrepid (almost Stravinsky-like) spirits while never losing its sense of dance, caprice, and effervescence." The composer's website.