Helios Choros, a Ballet, a triptych for orchestra. Autograph map of form 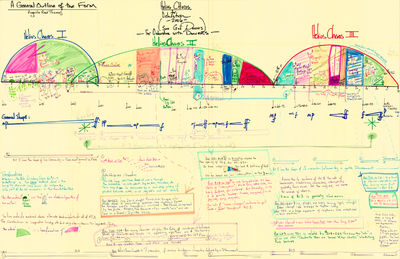 Across the upper third of the page, the graphic map of form is anchored to a horizontal timeline numbered from [0] to 38. Above the timeline, the three sections are marked by three arcs, each filled with a series of colored blocks and text noting specific changes and progressions in the work. Immediately below the timeline, small written notes and arrows mark specific moments or related sections. Below that, tempo changes noted with metronome markings and a diagram of the general dynamic changes. Across the lower half of the page, text in various colors, some boxed and connected to the timeline with dashed arrows, describe more specific musical ideas with information on phrasing, instrumentation, character, etc.

"Helios, in Greek Mythology, is the sun god, son of Hyperion, depicted as driving his chariot across the sky from east to west daily. Choros in ancient Greek drama means a band of dancers whose singing, dancing, and narration provide explanation and elaboration of the main action. My main inspiration while spending a lifetime writing music is music itself. I listen to "Jazz" as frequently as I listen to "Classical" music. Like all of my music, this work is based on a very integrated set of musical materials. What comes first for me? The sounds, the rhythms, the colors, the harmonies and then I work hard to integrate them across a 45-minute landscape." The composer's website