Fanfare of Hope and Solidarity for Orchestra. Autograph map of form 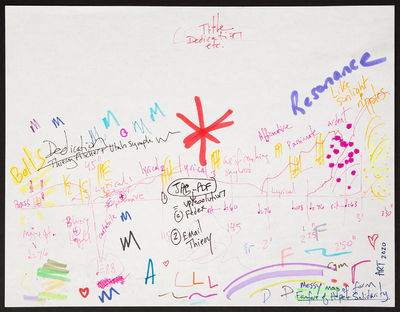 A dynamic visual representation of the work's progression, its elements anchored by a single horizontal line representing the 4-minute duration of the piece. Each of the minutes is numbered, with specific times relating to the stages of the work's progression indicated (45", 1'10", 1'45", etc.). Elements such as rhythmic groupings of note stems, solid blocks of color, individual colored lines of various proportions, etc., combine to provide an impression of the construction of the whole.

With autograph notes regarding instrumentation, dynamics ("Majestic & Optimistic," "As if reaching Skyward," "Ardent," "Like sunlight ripples"), tempo, etc., and the composer's own statement about the work at the foot of the leaf: "Music feeds our souls. Unbreakable is the power of art to build community. Humanity has and will always work together to further music's flexible, diverse capacity and innate power. The magnificence and energy of an orchestra are humbling, inspiring, and exemplify hope, solidarity and team work." Dedication to upper portion: "to Thierry Fischer and each member of the Utah Symphony."

The work premiered on YouTube "during a period of mandatory social distancing, on Memorial Day Weekend, by the Utah Symphony, Thierry Fischer conducting, May 22, 2020." Augusta Read Thomas website

Conceived at a most unsettling time, the Fanfare represents a coming together of instrumental (and personal) forces to create a positive and uplifting statement. The performance was a simultaneous remote videocast, with all performers self-distancing in their homes or studios. A true work of our time.

Together with:
The initial sketch plan entitled "Messy map of form Fanfare of Hope & Solidarity ART 2020." Executed in black and various brightly-coloured inks. While indeed "messy," the main elements of the final work are present. 1 leaf. Oblong quarto (8.5" x 11", 215 x 278 mm). Labeled and signed on the verso. "While ... she didn't write the music specifically considering that most people would hear it for the first time through a computer speaker - believing that it will work just as well in a concert hall - she did acknowledge considering how performing alone might present different challenges for the mnusicians than performing in the same room ... In no way do I want this to be thought of as the COVID piece, she says. I feel I'm reaching for miuch broader themes, something that could be played for years to come ... Beyond the details of the work, she emphasizes a spiritual component of continuing to create art in a difficult time ... And that perhaps there's a particular beauty for writing something that unites musicians in performance from their individual homes." The composer's website