Sweet Potato Kicks the Sun. An Opera for All Ages. For Small Ensemble and Special Guest Artist. Libretto by Leslie Dunton-Downer. Autograph map of form with sketches 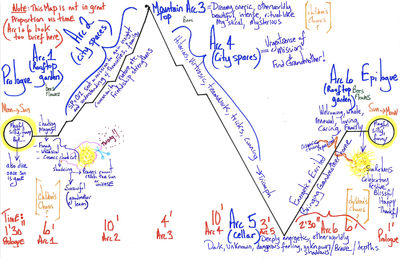 Map of form depicts the progression of the opera along a timeline stretched horizontally across the lower half of the page, numbered from 0 to 72', the opera concluding around 58.' Immediately below timeline, text regarding "Famous B.B. [beatboxing] Solo Show" and duration related to scenic development. Along the timeline, named sectional "arcs" define scenic changes, e.g., "Arc 1 Rooftop Garden," "Arc 5 Cellar," etc. Mostly above scenic arcs and comprising the balance of the page is a pictorial/graphic representation of the story progression including colorful drawings of scene settings along a linear path representing the main character's journey and written descriptions of musical character and tone. Along the upper margin a horizontal line in pink titled "The illusion line" with sharp peaks and dips, dots, squiggles, and arrows extending both above and below the line corresponding to specific moments in the work. At the right edge of the timeline, following the opera's conclusion, a green sticky note laid down with "Still have some wiggle-room vis time."

Together with scenic arcs map and sketch map of form. Oblong folios (ca. 280 x 430 mm). Both executed in black and bright multi-coloured inks.

Scenic arcs map illustrates the relationships among parallel scenes through colour-coded arcs that connect related portions of the work, the ends of each arc marked with the scene's name or setting and number designation. An unmarked timeline across the lower portion of the page shows the progression of time.

Sketch of map of form showing parallel scenes built around a linear depiction of the work through time in black ink, beginning and ending with prologue and epilogue represented as circles highlighted in yellow, connected by the jagged, sharp line of the scenic progression. The scenic line is labeled in blue ink with progressive arcs: "Arc 1 (Rooftop garden)," "Arc 2 (city spaces)," etc., corresponding to the arcs laid out in the scenic arcs map. Each arc with accompanying explanatory text in purple ink describing the character of the music with brief explanations of plot signed "ART 2017." Additional colours appear on the scenic map to denote particular performing forces or ensembles, for instance green for "bees flowers" and orange for "children's chorus.".Along the lower portion of the page, arcs are labled in red ink with duration in minutes. Note in the upper left corner in red ink "Note: This Map is not in great Proportion vis time (Arc 1 + 6 look too brief here)." Signed at foot of page "Augusta Read Thomas."

Map of form with fold in center and creased to bottom right corner. Generally in excellent condition. Commissioned by a consortium of opera companies led by the Santa Fe Opera in association with the San Francisco Opera and including the Opera of Kansas City, the Minnesota Opera Theatre of Saint Louis, the Sarasota Opera, and the Seattle Opera. Sweet Potato Kicks the Sun was premiered on 26 October 2019 by the Santa Fe Opera at the Lensic Performing Arts Center, Carmen Flórez-Mansi conducting.

"Although highly notated, precise, carefully structured, soundly proportioned, and while musicians are elegantly working from a nuanced, specific text, I like all my music to have the feeling that it is organically being self-propelled - on the spot - as if we listeners are overhearing (capturing) an un-notated, spontaneously embodied improvisation.

"I want all of my works to be enacted and performed with spontaneity, alertness, naturalness and musicality. This very invitation is clearly caressed on every page of the score of SPKTS."

"SPKTS is, at its core, an opera with the inner life of a captured improvisation. I am calling for ALL artists react to one another in real time, spontaneously - and not in any stylized manner - making every performance of SPKTS full of life and inner-flow - and each performance, even by the same artists, a little different from any other performance of it."

"In the opera, Nicole, the special guest artist, beatboxes and sings. The other vocalists sing and, from time to time, develop a wide variety of vocalizations akin to beatboxing. As such, the opera organically unfolds a sound world where different musical traditions crisscross and are deeply integrated." The composer's website