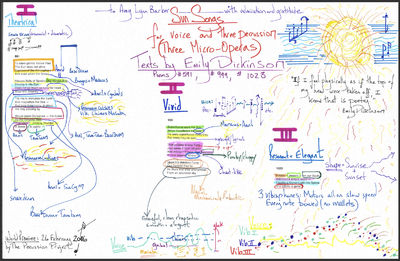 A vibrant visual representation of the work.

The poems are numbered I ("Theatrical"), II ("Vivid"), and III ("Resonant & Elegant"). Each is presented as a single unit, each constituting a "micro-opera," with computer printouts of the full text of each trimmed and laid down. The text is highlighted or blocked and connected by a single line to directions including instrument/s to be used, manner of performance, etc., with each "opera" accompanied by a short musical excerpt.

Sun Songs was commissioned by the School of Music at DePauw University in Greencastle, Indiana. "Composing for voice is my first passion in life ... For me, the human voice (possibly the most subtle, complex, and fragile yet forceful, flexible, seductive, and persuasive carrier of musical ideas and meanings) has always been an inspiration for and influence upon my entire musical thinking ... Emily Dickinson's poems are intensely personal, intellectual, introspective, and offer a meditation on life, death, and poetic creation; her poems share a close observation of nature as well as consideration of religious and philo-sophical issues." The composer's program note