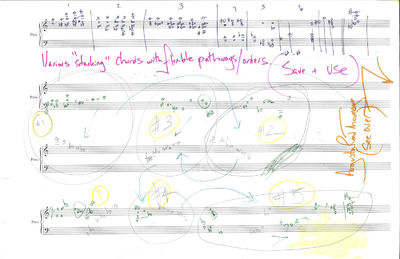 Recto
First system divided into six numbered sections, each containing a series of chords notated in black. The remainder of the page consists of circled clusters of chord iterations, grouped and numbered to correspond with those numbered above. Arrows between circled groupings denote possible pathways among the various groups.

Some wear, staining, and creasing; tears to lower margin. These sketches are not associated with a particular work/s but, rather, represent musical ideas, perhaps to be used at a later date; as such, they allow valuable insight into the composer's working methods.

"The music of Augusta Read Thomas ... is majestic, it is elegant, it is lyrical, it is "boldly considered music that celebrates the sound of the instruments and reaffirms the vitality of orchestral music" Philadelphia Inquirer