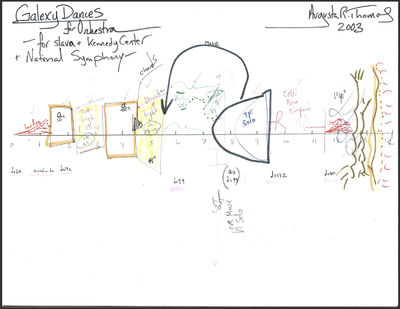 Map of form anchored by timeline across center of page, numbered evenly from 0-14. Graphic elements in various colors (blocks, wedges, squiggles, and dots) denote musical sections, some with written notes about instrumentation, character, or technique markings. A few with rhythmic indications. Tempo indications in manuscript below timeline.

Slightly worn and creased; two 1/2" pieces of plastic tape attached. Galaxy Dances premiered on 6 May 2004 by the National Symphony Orchestra under Mstislav Rostropovich.

"Galaxy Dances is the fifth work by Augusta Read Thomas to be performed by the National Symphony Orchestra, the third introduced into the orchestra's repertory by Mstislav Rostropovich, and the third commissioned and given its world premiere by the NSO." The composer's website

"Galaxy Dances opens in the lowest register of the orchestra in a timeless, floating, and gradually rising tune, which for a brief moment unfolds an impression of the massive, enduring universe. A timeless galaxy is upon us but steadily this music reaches upward and gains momentum, pushing through majestic, fanfare-like music, until it arrives at a driving, relentless dance." Program note by the composer