Cello Concerto #3: Legend of the Phoenix. Autograph map of form and sketches 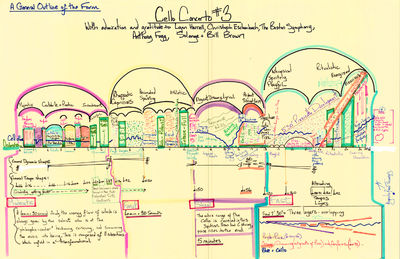 signed
by THOMAS, Augusta Read b. 1964
One leaf. Large oblong folio (482 x 737 mm; 19" x 29"). Original visual map of work. Executed in black and various bright colored inks on ivory paper. With title and dedication across the top of the page: "Cello Concerto #3 With admiration and gratitude to Lynn Harrell, Christoph Eschenbach, The Boston Symphony, Anthony Fogg, Solange + Bill Brown;" to upper left corner: "A General Outline of the Form."

The work is anchored on a horizontal timeline marked with each minute of the piece. Colorful blocks and graphic patterns above the timeline denote changes in instrumentation and musical character. Above the blocks are layers of micro and macro arcs that denote musical sections, each with descriptions such as "Majestic", "Incandescent", and "Whimsical Spritely Playful", etc. Below the timeline specific changes in tempo and dynamics are marked, along with additional explanatory text and duration markings.

5 leaves of autograph sketches plus an additional descriptive leaf "Notes for my meeting with Lynn Harrell @ his home in Santa Monica, CA in 2012."

Each sketch details a specific "arc" of the work, built on horizontal timelines detailing changes of tempo, dynamics, character, and instrumentation. Executed in black ink marking timeline and explanatory text, light blue ink representing the cello, and light pink ink representing the orchestra. With some additional colors noted below. Each initialed "A.R.T." at lower right corner (pp. 1-3, 5) or signed and dated "Augusta Read Thomas (2012)" (p. 4). Each page numbered in pencil to verso.

5 - "Over all form: Two Crescendos and timeless middle section." 2ff. 215 x 318 mm; 8.5" x 12/5." Offset and taped together at verso. With red ink showing overall arc above timeline and denoting lengths of the four arcs below.

An attractive visual representation of the final concerto which, when combined with the initial notes and sketches, provides a fascinating view of the compositional process and evolution of the work. Cello Concerto #3 was commissioned by the Boston Symphony Orchestra and composed expressly for cellist Lynn Harrell, who premiered the work on 14 March 2013.

"Although Thomas has said that the image of the phoenix - the mythical bird who died by fire and was reborn from its ashes - suggested itself as a title only after the music was composed, there is nevertheless some pointedly avian music in between the pyrotechnics, not just the usual chirps and twitters, but some charmingly bony, beaky dancing for the soloist with harp, wood blocks and tom-toms. And speaking of tom-toms, it is a small step from evoking fire in high percussion and brass to the fierce rhythms of big-band jazz at its hottest - a step that Thomas most gratifyingly took in this score." David Wright, Boston Classical Review