EOS (Goddess of the Dawn). A Ballet for Orchestra. Autograph map of form 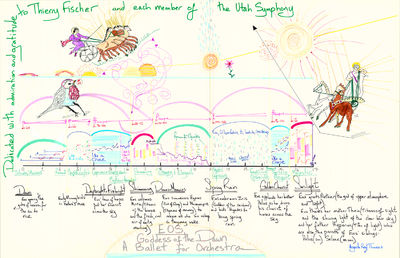 signed
by THOMAS, Augusta Read b. 1964
Large oblong folio (482 x 737 mm; 19" x 29"). Executed in brown, green, and various additional colors of ink on ivory paper. Title to lower center surrounded by illustration of a rising sun: "EOS / Goddess of the Dawn / A Ballet for Orchestra." Dedication wraps around top left margin: "Dedicated with admiration and gratitude to Thierry Fischer and each member of the Utah Symphony."

Map of form is built on a horizontal timeline numbered from 0 to 17. Above the line, sections are marked with colored arcs, above which are noted dynamic shifts. Below arcs are colorful graphic depictions of the music including lines, squiggles, dots, curves, pitches (given with letter-names), and rhythmic patterns (given in note stems and beams), with some written descriptions. Below the timeline, written descriptions of musical character ("Resonant," "Shimmering," etc.) and below that, movement titles and brief descriptions of the program: "Dawn / Eos opening the gates of heaven for the sun to rise," "Dreams + Memories / Eos summons Hypnos (God of Sleep) and Mnemosyne (Titaness of Memory) to release all who are asleep so they may wake," etc.

Attractively-rendered illustrations of Eos and Helios with their chariots, a songbird, and the journey of the sun across the sky decorate the upper half of the page.

"Although my music is careful and precise in its notation and structure, I like my music to have the feeling that it is an organic creation being self-propelled on the spot as if we listeners are overhearing an improvisation. I try to imbue the music with my own physical and mental sense of caprice, an improvisatory spirit, and a joy in a diversity of characters and colors. EOS exhibits a kaleidoscopic variety of rhythmic syntaxes, radiant colors, and resonant harmonic fields. I work hard to present a very clean and thoughtful technical control of materials and orchestration. I hope my efforts result in unique compositions -- always luminous and never muddy." From the composer's website