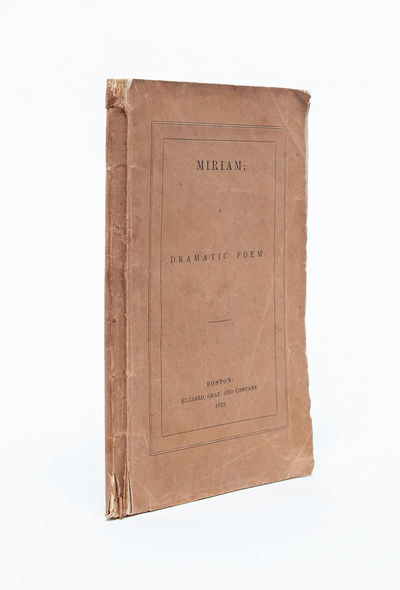 by [Hall, Louisa Jane]
Boston: Hilliard, Gray and Company, 1837. First edition. Original printed paper wrappers. Spine rolled, causing small splits to paper at foot of spine; minor loss to crown of spine. Contemporary gift inscription to the header of the title: "Hannah Austin from her friend A. Joy." Light scattered foxing throughout, else unmarked. A fragile and scarce work, presently the only copy on the market.

Considered the best work by the poet, essayist, and critic Louisa Jane Hall. Benefitting from her father's scholastic career as the founder of the Boston Lyceum for Young Ladies as well as his personal commitment to humanistic education, Hall was exposed from an early age to the classics and to the works of Shakespeare and Milton. "She was an industrious scholar, and the thoroughness of her study shows itself all through her works" (Perley). As an adult, Hall began to write dramatic poems focused on biblical women. Miriam was the first, written ten years before its publication and released with the author's deep reticence; but the acclaim with which it was met led her to produce Joanna of Naples in 1838 and Hannah, The Mother of Samuel the Prophet the following year. Emphasizing the resilience and strength of the women so often placed in the background of Christian history, Hall placed their individual experiences at center, making it clear that though the stories couldn't unfold without them, these women were rarely praised in their time and often met with tragedy. It is likely that Hall's early education led her to both her preferred literary form and topic. After all, the dramatic poem or "closet drama" of the 17th century was a genre women could participate in because dramatic readings happened privately at home; and indeed, Elizabeth Cary became the first woman to publish under her own name in English, releasing The Tragedy of Miriam in her own lifetime. Hall, much like her Miriam, represents a new generation of woman; rather than a rewrite of Cary's Jewish queen Miriam, Hall's is a Christian rebel who sacrifices herself for the principles of peace and love. She is a woman made possible by the death of Queen Miriam centuries before, as Hall is a writer whose existence was made possible by Cary's. An under-studied work worthy of further examination within the contexts of its own time and the larger tradition of women's writing. (Inventory #: 3936)
$1,250.00 add to cart or Buy Direct from
Whitmore Rare Books
Share this item