People of the First Man: Life among the Plains Indians in Their Final Days of Glory. The Firsthand Account of Prince Maximilian's Expedition Up the Missouri River, 1833-34 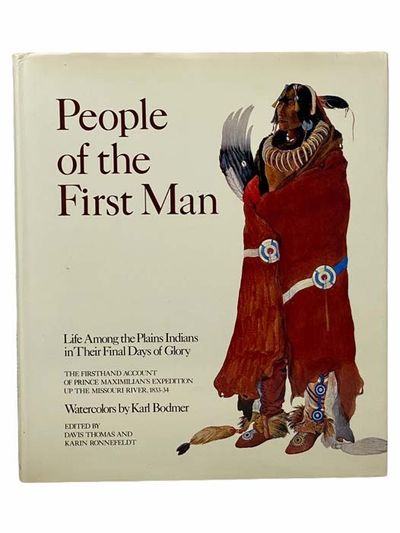 by Thomas, Davis; Ronnefeldt, Karin
New York: E. P. Dutton, 1976. First Edition. Large Hardcover. Near Fine/Near Fine. Bodmer, Karl. First edition. A near fine copy in a near fine jacket. 1976 Large Hardcover. 255 pp. Watercolors by Karl Bodmer. "In 1833, the German explorer and naturalist, Prince Maximilian zu Wied, together with Karl Bodmer, his Swiss-born artist companion, traveled some 5,000 miles along the Missouri River during their year-long sojourn with the Plains Indians. Mandan, Blackfoot, Cree, Sioux, Minnetaree, Assiniboin, and Gros Ventres were among the diverse tribes of the Plains, where mastery of the horse had catapulted the Plains Indians to fame and undreamed-of material wealth less than a half century before Maximilian's arrival in North America. Within a decade of Maximilian's return to Europe, Manifest Destiny, accompanied by smallpox and alcohol, led to the virtual extermination of the Plains culture. Traveling as guests of the American Fur Company, which trafficked in pelts and illegal whiskey, the European travelers were quick to discern the Indians' fate. It became Maximilian's and Bodmer's dangerous task to live and travel among many tribes to record painstakingly their daily life and ceremonial activities. Karl Bodmer's watercolors of tribal warriors, women, and chiefs in full regalia, war parties, the hunt - faithfully reproduced here in full color, most of them for the first time - are certainly the finest paintings ever made of an aboriginal culture. Maximilian's monumental narrative, which has long been regarded as one of the classics of early western exploration, is presented here in a carefully edited version supplemented with revealing and previously unpublished entries from his original field journal. An editorial introduction precedes and a selection of watercolors follows each section of Maximilian's narrative, enabling today's reader to experience the daily adventures of those intrepid travelers. In words and pictures we recapture the virgin beauty of landscapes rich with wildlife and the unspoiled native dignity of proud warriors."--jacket (Inventory #: 2306309)
$25.00 add to cart or Buy Direct from
Yesterday's Muse
Share this item
Yesterday's Muse, Inc.
Offered by