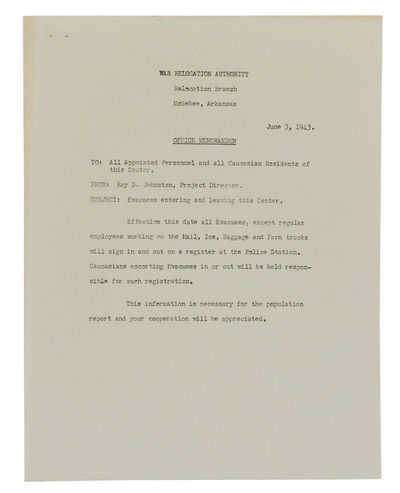 by [Japanese Internment]; Johnston, Ray D.
McGehee, AR: War Relocation Authority, 1943. Near Fine. Single-sided sheet. Near Fine with a little toning along edge, two tiny rust stains (not holes) near corner. A memo from Ray D. Johnston, Project Director at Rohwer War Relocation Center to "All Appointed Personnel and all Caucasian Residents of this Center" requiring all employees (with a few named exceptions) to "sign in and out on a register at the Police Station. Caucasians escorting Evacuees in or out will be held responsible for such registration." The Rohwer War Relocation Center was an internment camp for Japanese-Americans in southeastern Arkansas during World War II. Many of those imprisoned there were from California, and many were children. (Inventory #: 140940337)
$250.00 add to cart Available from
Burnside Rare Books
Share this item
Burnside Rare Books
Offered by

Where the Sidewalk Ends

New York : Harper & Row , 1974
(click for more details about Where the Sidewalk Ends)

Boston and London : Marion Boyars Ltd , 1981
(click for more details about For the Birds)
View all from this seller>