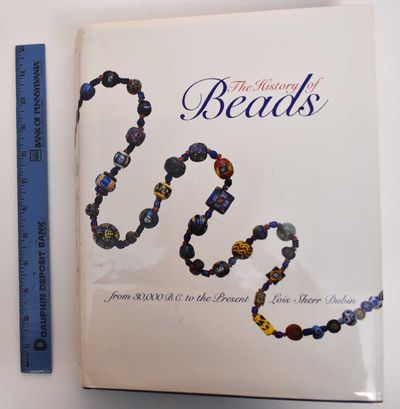 by Dubin, Lois Sherr and Togashi
New York: H.N. Abrams, 1987. Hardcover. VG/VG (light foxing to upper block, light shelfwear to boards and corners. Pages are otherwise clean and clear. Dust jacket has light wear.). Blue cloth boards with stamped lettering on front cover, silver spine lettering. White dust jacket, color illustrated with red and blue lettering, illustrated end pages, 364 pp, profusely illustrated with 356 plates, 254 in full color. "Collected between these covers are several thousand examples of beads, beaded jewelry, and beadwork representing 40,000 years of history and drawn from every major culture and region of the world.... Also included are technical diagrams, 15 maps of bead sources and distribution patters, a bead shape chart, and an extraordinary 8 page foldout of over 2000 beads in full color, assembled as a time line that places every important bead type in its cultural and historic context."-dust jacket Chapters include: Why a book on beads -- The beginnings -- Antiquity : from Neolithic times to the Roman Empire -- Europe : the late Roman empire to the Renaissance -- Prayer beads -- The world of Islam -- The age of European expansion -- Africa -- The Far East : China, Korea, and Japan -- India -- Central Asia -- Southeast Asia and the South Pacific -- Middle and South America -- North America -- The special beads : amber and pearls -- The magical eye bead -- The twentieth century : Europe and North America -- Bead chart : a time line of bead history -- Bead shape table. (Inventory #: 179586)
$27.00 add to cart or Buy Direct from Mullen Books
Share this item

The Collected Writings of Salvador Dali