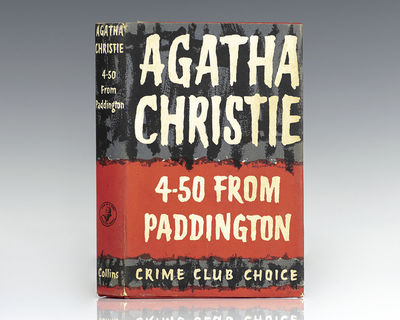 by Christie, Agatha
London: Collins Crime Club, 1957. First edition of Christie's classic murder mystery, adapted several times for television and film. Octavo, original cloth. Near fine in a near fine dust jacket. A very bright example. Listed by Guinness World Records as the best-selling fiction writer of all time, the "Queen of Crime" Agatha Christie published sixty-six detective novels and fourteen short story collections throughout the course of her lifetime which sold more than two billion copies. A master of suspense, plotting, and characterization, in her prime, Christie was rarely out of the bestseller list. 4.50 from Paddington was first published in November 1957 by Collins Crime Club and simultaneously in the United States as What Mrs. McGillicuddy Saw!, by Dodd, Mead and Company. (Inventory #: 119053)
$250.00 add to cart or Buy Direct from
Raptis Rare Books
Share this item