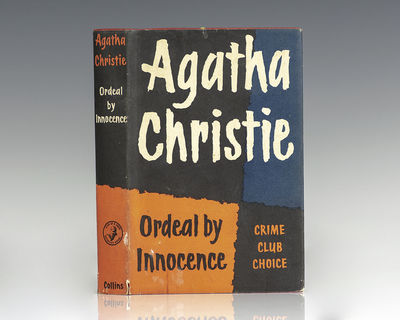 by Christie, Agatha
Collins Crime Club: London, 1958. First edition of Christie's classic murder mystery. Octavo, original cloth. Near fine in a very good dust jacket. A bright example. First published in the U.K. by the Collins Crime Club on November 3rd 1958 and in the US by Dodd, Mead and Company the following year, Agatha Christie's Ordeal by Innocence follows the story of Arthur Calgary, a crucial witness of an unsolved murder unaware of his role as such until two years after a man is found guilty. The novel was adapted into a film of the same name in 1985 directed by Desmond Davis and starring Donald Sutherland, Sarah Miles, and Christopher Plummer. (Inventory #: 119465)
$100.00 add to cart or Buy Direct from
Raptis Rare Books
Share this item