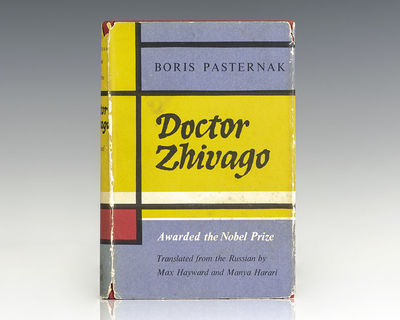 by Pasternak, Boris
London: Collins & Harvill, 1958. First edition in English of the work which garnered Pasternak the Nobel Prize in literature. Octavo, original red cloth. Very good in a very good dust jacket. Jacket design by John Woodcock. Translated by Max Hayward and Manya Harari. In his 1958 New Yorker review, Edmund Wilson called the novel "one of the very great books of our time Doctor Zhivago will, I believe, come to stand as one of the great events in mans literary and moral history." It was not allowed to appear in the Soviet Union until 1987, twenty-seven years after the authors death. The novel was made into a film by David Lean in 1965, and since then has twice been adapted for television, most recently as a miniseries for Russian TV in 2006. (Inventory #: 118551)
$600.00 add to cart or Buy Direct from
Raptis Rare Books
Share this item

1787
(click for more details about John Hancock Signed Document.)
View all from this seller>