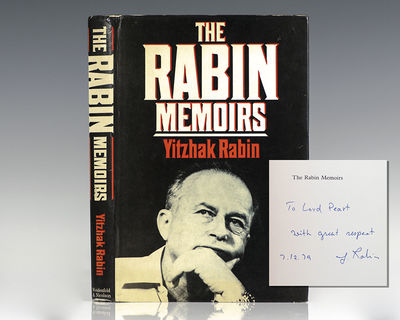 by Rabin, Yitzhak
Boston: Little, Brown & Company, 1979. First edition in English of the memoirs of Yitzhak Rabin. Octavo, original cloth, illustrated with sixteen pages of photographs and five maps. Association copy, inscribed by the author on the half-title in the year of publication, "To Lord Peart with great respect Y. Rabin 7.12.79." The recipient Fred Peart was a British Labour politician who served in the Labour governments of the 1960s and 1970s and was a candidate for Deputy Leader of the Party. In 1976, Peart was created a life peer serving as Leader of the House of Lords and Lord Privy Seal at a time when the Labour faction in the Lords was tiny compared to the vast Tory majority, mainly composed of hereditary peers. After Margaret Thatcher won the 1979 election, Peart continued as Leader of the Labour Peers and thus became Shadow Leader of the House of Lords. He served in those roles until 1982. Fine in a near fine dust jacket. Yitzhak Rabin was the fifth Prime Minister of Israel, serving two terms in office, 1974-77 and 1992 until his assassination in 1995. Rabin was born in Jerusalem to Ukrainian-Jewish immigrants and was raised in a Labor Zionist household. He led a 27-year career as a soldier. As a teenager he joined the Palmach, the commando force of the Yishuv. He eventually rose through its ranks to become its chief of operations during Israel's War of Independence. He joined the newly formed Israel Defense Forces in late 1948 and continued to rise as a promising officer. He helped shape the training doctrine of the IDF in the early 1950s, and led the IDF's Operations Directorate from 1959 to 1963. He was appointed Chief of the General Staff in 1964 and oversaw Israel's victory in the 1967 Six-Day War. Rabin served as Israel's ambassador to the United States from 1968 to 1973, during a period of deepening U.S.-Israel ties. He was appointed Prime Minister of Israel in 1974, after the resignation of Golda Meir. In his first term, Rabin signed the Sinai Interim Agreement and ordered the Entebbe raid. Rabin was Israel's minister of defense for much of the 1980s, including during the outbreak of the First Intifada. In 1992, Rabin was re-elected as prime minister on a platform embracing the Israeli-Palestinian peace process. He signed several historic agreements with the Palestinian leadership as part of the Oslo Accords. In 1994, Rabin won the Nobel Peace Prize together with long-time political rival Shimon Peres and Palestinian leader Yasser Arafat. Rabin also signed a peace treaty with Jordan in 1994. Rabin's memoirs are important not only for the insider's view they offer about Israel and the Middle East, but also for providing a very human portrait of a heroic world leader. (Inventory #: 118518)
$1,200.00 add to cart or Buy Direct from
Raptis Rare Books
Share this item