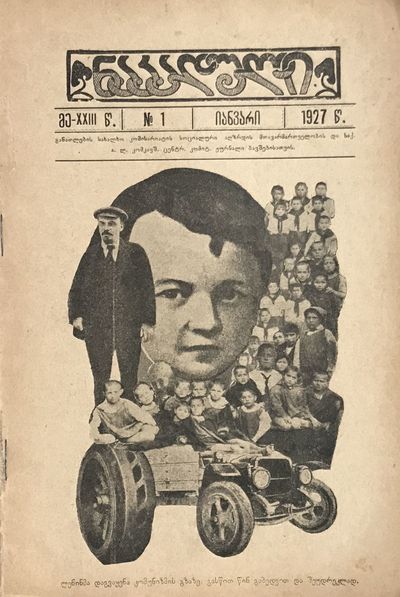 by [Nakashidze, Nino, editor]
Tbilisi, 1925-1927. Octavos (26 × 18 cm). Original illustrated staple-stitched wrappers; 32-40 pp. Illustrations throughout. Light soil and foxing to wrappers, else very good. Four issues of a Georgian communist periodical for children, with poetry, musical notes, puzzles, photographs, drawings, and vignettes throughout. Issue 1 (1927) of "Nakaduli" contains two photomontages of children with Lenin and other propagandistic motifs.Edited by the Georgian children's writer and editor Nino Nakashidze (1872-1963), who worked for the journal since 1904 and was its editor from 1910 to 1928. Nakashidze was a personal acquaintance of Lev Tolstoy, who visited the writer repeatedly at his Iasnaia Poliana estate. Nakashidze was an early revolutionary activist and participated in the 1905 Revolution, for which she was repeatedly prosecuted and briefly exiled to the Vyatka Region. She wrote numerous works for children and translated Tolstoy, H. G. Andersen, and others into Georgian. For more on Nakashidze, see also: http://feminism-boell.org/en/2014/01/18/nino-nakashidze. As of October 2020, KVK and OCLC only show a single issue at Columbia University. (Inventory #: P5711)
$450.00 add to cart or Buy Direct from
Bernett Penka Rare Books
Share this item